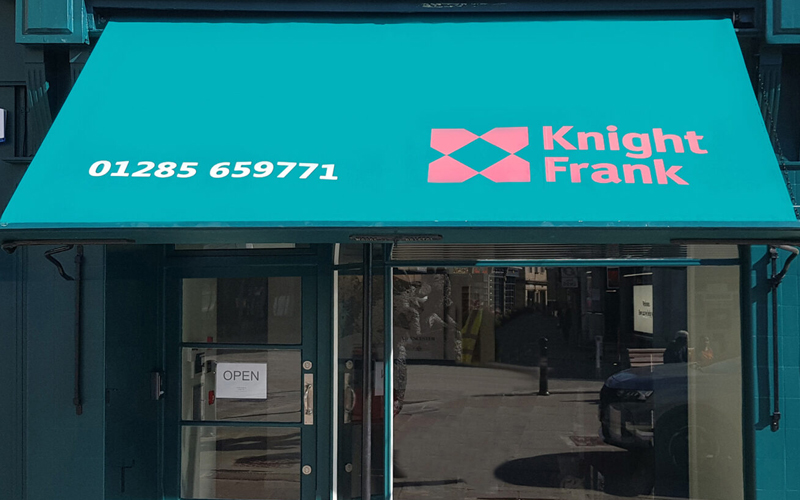 Traditional shop blinds have been manufactured by us in London since our formative tears late in the Nineteenth Century  and our founder, Mr John Dean, would have been able to recognise these five traditional shop blinds we have just installed at the Knight Frank offices in Cirencester.  At Deans we have been installing and maintaining this type of traditional shop blind at some of the 83 Knight Frank UK offices for many years.  This particular installation, in Cirencester,  is particularly stunning as a result of the corner location. One should note especially that, despite the different height fixings  and arm extensions, the awnings have been installed to align their head heights in unison which has created a uniform aspect and maximum window shade. The rollers and mechanical components of the awnings have been neatly concealed within the shopfront facias so that, when retracted, there are no unsightly projections to offend the historic scene which is inherent  with  the historic town of Cirencester.  The timber elements of the traditional shop blinds are constructed from harvested hard wood which has been  carefully hand painted with environmentally sound, water-based, paint.  The Knight Frank graphic has been applied to the main awning cover by the use of our bespoke RAGS® branding process.

In 1896, just four years after Deans was started,  Knight Frank & Rutley was founded as a valuations, surveying and auctions business. Its first sale was held on April 23rd at Conduit Street in London. In 1964 The firm opened an office in Geneva as a gateway to Europe. By 2007 Knight Frank had expanded to more than 165 offices in over 36 countries on six continents, with over 5,000 locally-based professional staff handling huge amounts of real estate annually. Today there are 523 offices covering sixty territories.

At the end of the 18th century Cirencester was a thriving market town, at the centre of a network of turnpike roads with easy access to markets for its produce of grain and wool. A local grammar school provided education for those who could afford it, and businesses thrived in the town, which was the major urban centre for the surrounding area. Today it is a major centre for the Arts and Crafts movement in the Cotswolds.