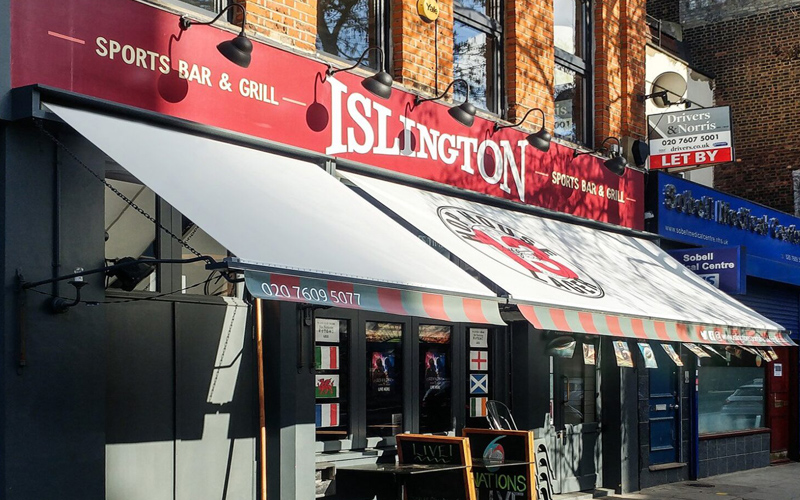 Deans traditional shop blinds have been made in pretty much the same way since we first started making them back in the late nineteenth century, however, today we are able to take advantage of some modern technology without compromising the traditional look which our clients value. The hard wood traditional blinds boxing and front lath is carefully hand painted, as it was back then but now we use environmentally sound water-based paint rather than the rather unpleasant lead based variety used by our forebears. These two traditional shop blinds on the Islington Sports Bar and Grill have a unique cover design. Using our bespoke RAGS® system of graphics application we have been able to print the valances of the blinds in two colours to match the logo appearing on the main cover. The logo on the main cover is also of special note and you can see from the close up image alongside how details this design is. Only the use of our special process has made such a defined graphic possible on the blind.

Sports bars were originally an  American tradition, but these days London hosts one of the best. At the Islington Sports Bar and Grill, you can catch the big games, the speciality games with all the winners and losers, good sportsmanship and bad.  The bar caters for all sports with lots of TVs/channels and top food. Prices are competitively set and a full selection of drinks is available. The bar is also very close  to Arsenal’s Emirates Stadium so a favourite with football fans. They also hold late night events for International sports such world class boxing and American Grid Iron Football. .

Islington was originally named by the Saxons Giseldone, then Gislandune). The name means ‘Gīsla’s hill’ from the Old English personal name Gīsla and dun ‘hill’, ‘down’. The name then later mutated to Isledon, which remained in use well into the 17th century when the modern form arose. Islington was famous for a while as the six-bedroom four storey home of former prime Minister Tony Blair.