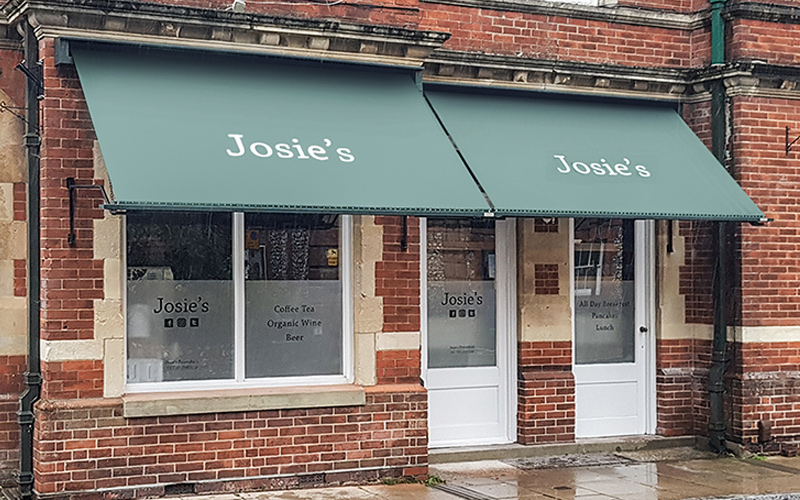 These Traditional shop awnings are installed at Josie’s; a restaurant and bistro situated on Saint Peter’s Road,  Petersfield, in East Hampshire. This building, along with much of the Petersfield architecture dates for the eighteenth and nineteenth century and the traditional shop awning chosen reflects perfectly on the corner site of this  old building. The  awning boxes, constructed from painted, harvested, hardwood, are neatly fixed below the decorative stone cornices and powder coated traditional steel arms are securely mounted to the brickwork substrate. The fabric of the awning is in a subdued olive green colour with the Josie’s logo prominently displayed in white, through our bespoke RAGS® application process. You will also note the steel “storm” chains affixed to the front blind laths which support the awning in windy conditions. Despite the Traditional shop awning being one of the most robust of awnings Deans always recommend awnings are retracted in strong winds or inclement weather.

Established in 2011 Josie’s are a group of family-run independent coffee shops serving delicious quality coffee and freshly made, well sourced food. They first opened in Bishop’s Waltham in 2011 and have since expanded to sites in Winchester and this one in Petersfield. Nothing makes Josie’s happier than serving you great tasting coffee and food every day. What was  formerly the site of the Bell Inn, Petersfield, is this latest endeavour  and some detail of this previous occupation is still to be seen in the stained glass windows

Petersfield is a market town and civil parish in the East Hampshire district of Hampshire. The town’s market square has an 18th-century statue of King William III by Henry Cheere. The king is mounted and the statue is on an engraved plinth. It is one of only five statues of William in the United Kingdom outside Northern Ireland (the others being in Glasgow, Brixham, Hull and Bristol) and commemorates William’s victory at the Battle of the Boyne. Victoria Cross holder Commander Loftus William Jones, killed at the Battle of Jutland, was born in Petersfield. During the battle the Commander lost his leg but, while he was being tended to, he famously noticed that the Ensign was not being flown correctly and he insisted it be adjusted.