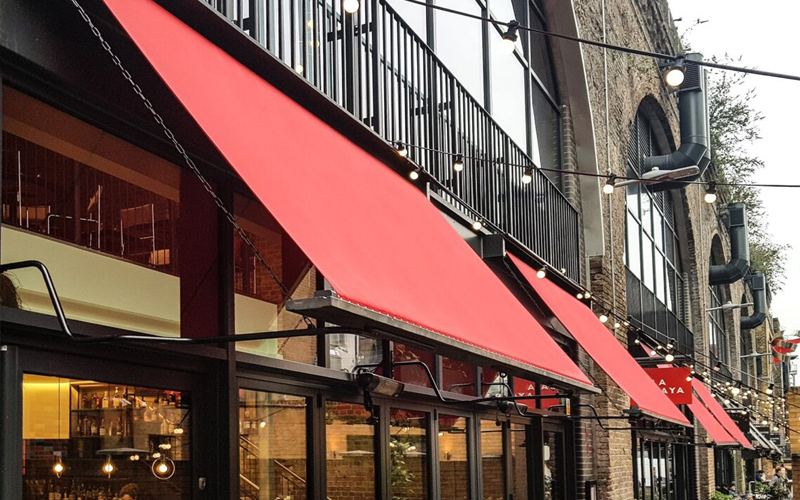 These two Traditional shop awnings have been installed at the Bala Baya Bakery and restaurant in Southwark. Of special note is the very complicated arrangement of the traditional powder coated steel  shop awning arms which have had to be carefully sculptured in such a way as to support the awnings without compromising the irregular arrangement of windows and associated mullions. This sort of work can only be satisfactorily achieved by a specialist traditional awning manufacturer such as Deans who’s experience of many such sites enable them to accomplish such work neatly and efficiently. Valances have not been installed on these shop awnings at the request of the client but it is possible to add additional branding by their application using our RAGS® graphics application process . The traditional shop awning boxes and laths are constructed from harvested hard wood, and  painted to match the shopfront , using environmentally sound water based paint.

Bala Baya is a venue with multiple faces. A bakery in the morning, a fast paced pitta kiosk with a sit down mezzanine at lunch and a buzzy street level restaurant at night. Their food is rooted in tradition but with a progressive and modern take.  Inspired by Bauhaus architecture, Bala Baya has created an amazing location  which  permits the experience of  the spontaneity of Tel Aviv right here in London  the heart of Southwark.

Until the London Government Act 1899 Southwark was two Boroughs;  East Southwark and West Southwark.  However, the existing boundaries were found to be unsatisfactory. Accordingly they were realigned, for the most part following the centre of roads. Guy’s Hospital, which had been divided between three parishes, was entirely taken into the borough. Other notable places within the borough of Southwark are the many places of worship and other ecclesiastical building; some  now put to other uses.  The borough also contains The Imperial War Museum, The Tate Modern, The Old Operating Theatre Museum, the remains of Winchester palace and many more besides.