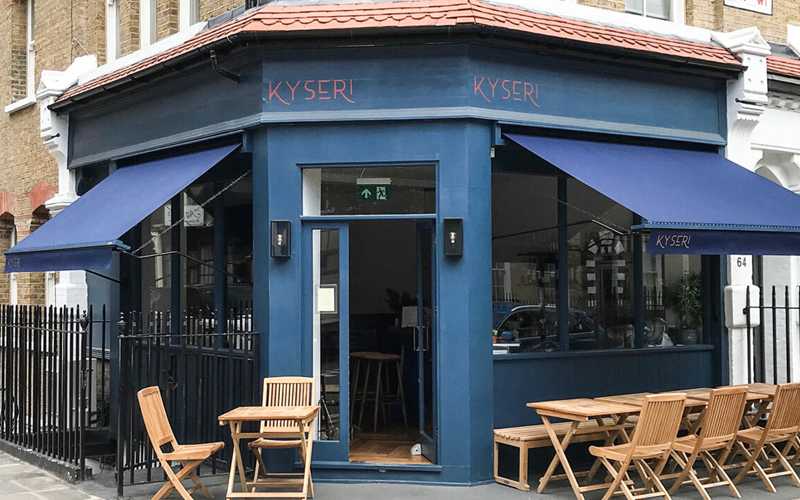 These two Traditional Deans shop awnings are installed at the new Kyseri restaurant, located on the corner of Grafton Way and Whitfield Street, in London’s Fitzrovia district. The pair of traditional shop awnings  are installed on the corner site just beneath the decorative lintel and have been neatly set back so as to provide a unitary appearance. The hardwood awning boxes have been painted the same colour as the shopfront itself and the blue awning fabric is only broken by neat Kyseri graphic placed on the valances through the use of our bespoke RAGS ® branding process. Steel arms, which support the front lath have been powder coated, to provide weather resistance, in traditional black along with the shop awning brackets and other fittings. The Deans traditional shop awning provides an authentic Victorian look to any turn of the century, or earlier, building and is recommended for historically sensitive locations.

Kyseri offers modern dining in the heart of Fitzrovia, pushing the boundaries of traditional Turkish and Cypriot cuisine. Kyseri strives to create a fair and transparent tipping policy for all of its staff and guests. Kyseri is proud to support Switchback. The menu includes big, bold flavours taking inspiration from their Turkish-Cypriot heritage as well as classical dishes alike – on plates designed to be shared with friends and family. Food is complemented by an innovative regional wine list, featuring wines from Turkey as well as Greece, Georgia, Armenia, and Lebanon.

​Fitzrovia is named after the Fitzroy Tavern which in turn was named after Charles FitzRoy (later Baron Southampton), who first developed the northern part of the area in the 18th century. FitzRoy purchased the Manor of Tottenhall and built Fitzroy Square, to which he gave his name; nearby Fitzroy Street also bears his name. By the beginning of the 19th century, this part of London was heavily built upon, severing one of the main routes through it, Marylebone Passage, into the tiny remnant that remains today on Wells Street, opposite what was then the Tiger public house — now something entirely different!