Shop blind for The Palomar Restaurant in Soho 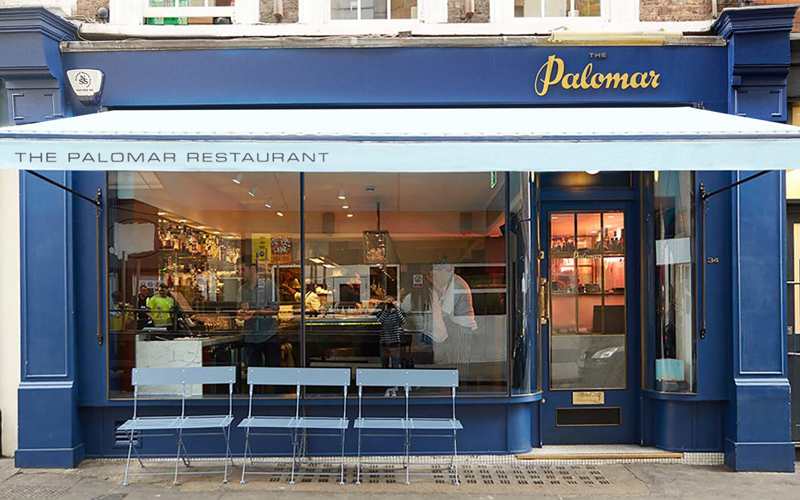 This traditional Deans shop blind at The Palomar restaurant, in the heart of Soho, has a distinctive difference from most of the Deans shop blinds we install in that it has been neatly recessed within the facia of the shop beneath the distinctive Palomar sign. The shop blind extends out to the pavement area providing some shelter for those customers who like the idea of taking their coffee in the Continental style whilst people watching the fascinating passersby of Soho. We have hand painted the front lath of the shop blind to match the shop facade and the cream of the awning fabric stands out in cool contrast. The name of the Palomar restaurant has been elegantly transferred on to the shop blind hanging valance, also in the same blue, and has been created through the use of our bespoke RAGS® branding process.  As usual, the shop blind arms have been powder coated in our London facility in the traditional Victorian black.

The Palomar is a Soho restaurant in the centre of London’s theatre land, serving the food of modern day Jerusalem. A menu influenced by the rich cultures of Southern Spain, North Africa and the Levant. At the front of the restaurant is a 16 seat zinc kitchen bar that overlooks the chefs; a mosaic marble floor leads to the dining room at the back. The flooring is in reclaimed parquet which matches the , dark oak panelled walls. Finally there is a large skylight which allows natural light to flood the area during the day.

Cutting across Shaftesbury Avenue from Chinatown up into Soho, Rupert Street was named in 1676 after Prince Rupert of the Rhine: the nephew of King Charles I; a flamboyant warrior who used to ride into battle with his pet poodle. Prince Rupert and his famous poodle would have felt right at home there today. With a number  excellent restaurants and cosy LGBT+ venues Rupert Street excels  during Pride every July, when it’s decked out in rainbow regalia. But it’s a culinary hotspot all year round, with more options than you could fit into a year of lunch breaks.