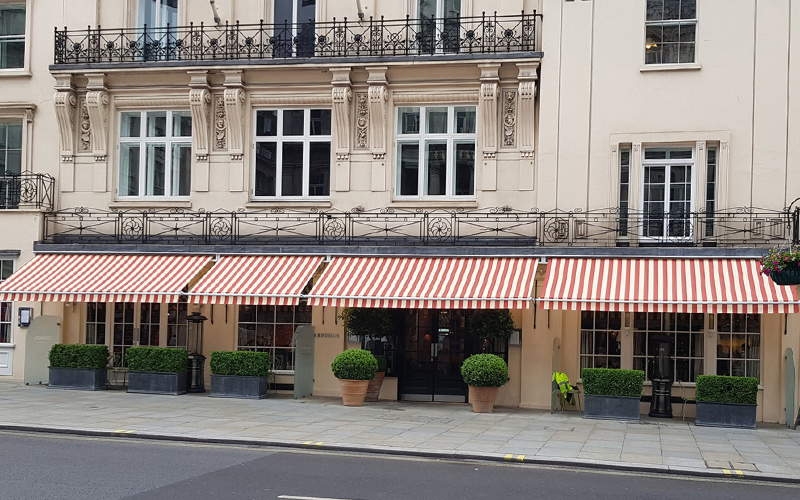 Traditional Deans shop awnings are one of our most popular products and one which we have been manufacturing and installing for nearly 130 years. Deans shop awnings have hardwood boxes and front laths which are painted, using environmentally safe water based paints, often the same colour as the shopfront. The awning fabric we use is woven from fade free yarn and is often decorated with client branding using our RAGS ® branding process. Steel arms, which support the front lath, are  powder coated, to provide weather resistance; the most popular colour being black consistent with the Victorian style. Brackets and other fixings are then coloured appropriately to match. The shop awning is particularly resilient and we are frequently asked to recover the fabric element as the awnings themselves can give decades of service, These four shop awnings, installed at the Haymarket Hotel in London, are an excellent example of this and we have recently recovered them in a bold, traditional, striped design totally in keeping with this classical building.

The Haymarket Hotel is situated on the corner of Haymarket and Suffolk Place in the heart of London’s theatre district. It is next door to the famous Haymarket Theatre Royal and is surrounded by some of London’s best restaurants and bars. The hotel  is ideally located for Mayfair, Regent Street and Jermyn Street shopping.

Haymarket connects Pall Mall with Piccadilly. It is recorded in the Elizabethan times as a street market for the sale of fodder and other farm produce. At that time, it was a rural spot, with the village of Charing (Charing Cross) the closest habitation. This market continued to the reign of William III; by that time, carts carrying hay and straw were allowed in the street to trade, toll free. When Haymarket was paved In 1692, when the street was paved, a tax was levied on the loads.