Traditional shop blinds at The Farmhouse 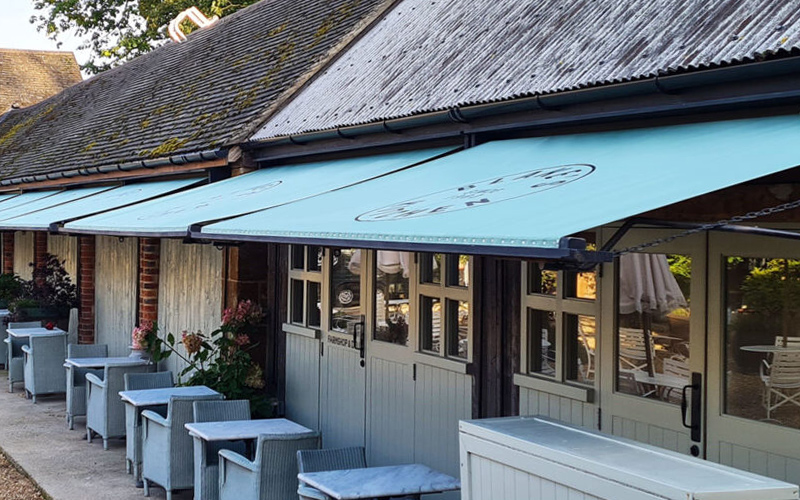 Deans original shop blinds have been made in almost  the same traditional way they have since we started manufacture back in 1894. However, today we are able to take advantage of some modern technology without compromising the traditional  look of the Deans original shop blinds which our clients value so much. These shop blinds, which we have installed at the exclusive Soho House Farmhouse Hotel and Club in Chipping Norton, utilise a hard wood awning box front lath and cover tacker  which have all been carefully hand painted in environmentally sound water-based paint, rather than the rather unpleasant lead based variety used in years gone by. The metal work of Deans traditional shop blinds  is also treated differently and we take advantage of our very own powder coating plant to finish this part of the awning in a high impact, durable, blemish free way. The fabric has been selected from one of our over 300 colourways and branding has been achieved through the application of our bespoke RAGS® Graphics application process.

Soho House began in London’s Greek Street in 1995, when founder Nick Jones was offered the space above his restaurant, Cafe Boheme. It could only be accessed via a small door, inspiring Nick to turn the townhouse into a members’ club for the local artists and actors who ate downstairs. Today, they have members and Houses around the world, as well as restaurants, spas, workspaces and cinemas.

The Farmhouse is Set in 100 acres of Oxfordshire countryside, Soho Farmhouse offers an idyllic setting spacious Nantucket-style accommodation, the facilities of a de luxe “Centre Parcs” and indulgent food and drink. The result? The ultimate country retreat with all the luxuries of an exclusive Mayfair hotel.

The town named Chipping Norton  derives its name from  ‘market north town’, with “Chipping” (from Old English cēping) meaning ‘market’. Chipping Norton began as a small settlement at the foot of a hill on which stand the motte-and-bailey Chipping Norton Castle. Only the earthworks of the castle remain. Today the town and its environs is the go to choice for many celebrities wanting to locate away from the city but in an exclusive “set”.