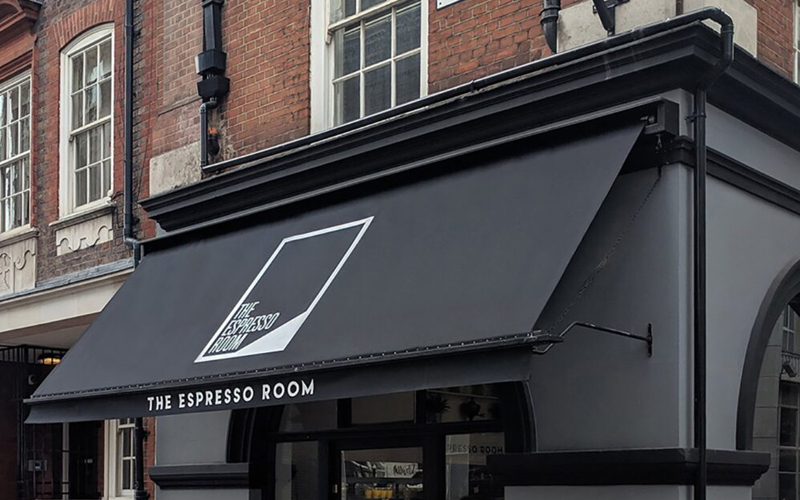 This traditional Deans blind  at Espresso, of Lincoln’s Inn Fields in London,  provides more than shade and general weather protection, it also acts as a  three dimensional sign; pointing the way to the establishment and making it stand out proudly  on the corner with Gate Street. Using our bespoke RAGS® system of graphics application we have also printed the main cover  of the awning  with the client name and detailed branding. This attractive traditional Deans blind  has  been made in much the same way since we first started making them back in the late nineteenth century. However, nowadays, we are able to take advantage of modern technology without compromising the traditional look which our clients value. The hard wood traditional blind boxing and front lath is carefully hand painted, as it was back then. However,  now we use environmentally sound, water-based, paint rather than the unhealthy and hazardous lead based variety used in the past.

The Espresso Room have four locations at prestigious sites around London and have  built a reputation of being one of the London’s most well-regarded specialty coffee shops . They  serve award winning artisan coffee, delicious homemade food as well as incorporating a new jungle themed speakeasy-style bar at their new  flagship site in Holborn. Espresso are also known for their Caravan’s Market Blend Espresso at each of the  locations including this one in Lincoln’s Inn Fields. This particular coffee blend  has a light, lingering sweetness and a vibrant, juicy acidity with just a hint of floral on the finish.

Lincoln’s Inn Fields is named after the adjacent Lincoln’s Inn, where  the private gardens are separated from the Fields by a perimeter wall and a large gatehouse. The lawned area in the middle  is the location for  a tennis court a netball court and a bandstand. The square was once used for corporate events, but this practice has been disbanded. In the 18th Century it is thought that this was the venue for cricket matches and other leisure activities.