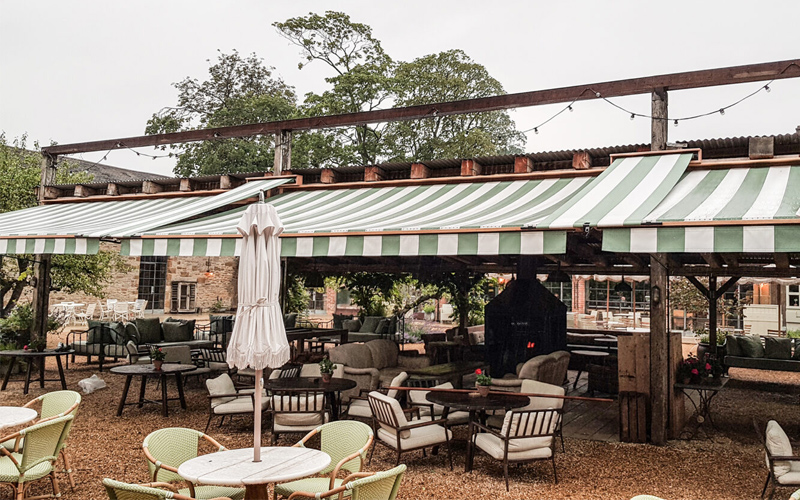 Traditional awnings have been installed by us over the years at numerous Soho House premises. and these three traditional awnings  are the latest additional to an extensive portfolio of work we have carried out for the iconic Soho House International private members club. Installed at The Soho Farmhouse, near Great Tew in Oxfordshire, the three new awnings, supplemented by junction covers for complete protection,  complement the three similar awnings we installed on the opposite side of this rustic courtyard feature in the centre of the complex.  The awnings are constructed from hardwoods sympathetically finished to blend in with the distressed  timber finishes favoured on this extensive one hundred  and ten acre complex in the heart of the Cotswolds. Whilst giving the appearance of old fashioned sail cloth canvas the striking green and white block strip of the awning fabric is in fact woven  from a modern yarn which has both fade fee and anti-soil properties. The steel and iron parts on the traditional awnings have been powder coated in traditional black to give a robust, long lasting, finish .

This Soho House  member’s club is set  in the magnificent Oxfordshire countryside and comprises ten garden rooms, 40 cabins, a four-bedroom cottage and a seven-bedroom farm house.  Club spaces include the Hay Barn, Main Barn and Mill Room for eating and drinking, a Boathouse with outdoor and indoor heated pools, Cowshed Relax spa with Steam and Sauna Island, and Cowshed Active with gym and studio. There is also an Electric Barn cinema, tennis courts, a five-a-side football pitch, horse stables, clay pigeon shooting and a Teeny Barn and Camp.

Nearby the village of Great Tew is most certainly a ‘picture postcard’ village but it is not a traditional Cotswold village: here, on the edge of the Cotswolds, the stone is a much darker red – ironstone – and the cottages are thatched, not a particularly common feature in the Cotswolds, where slate roofs are more common.