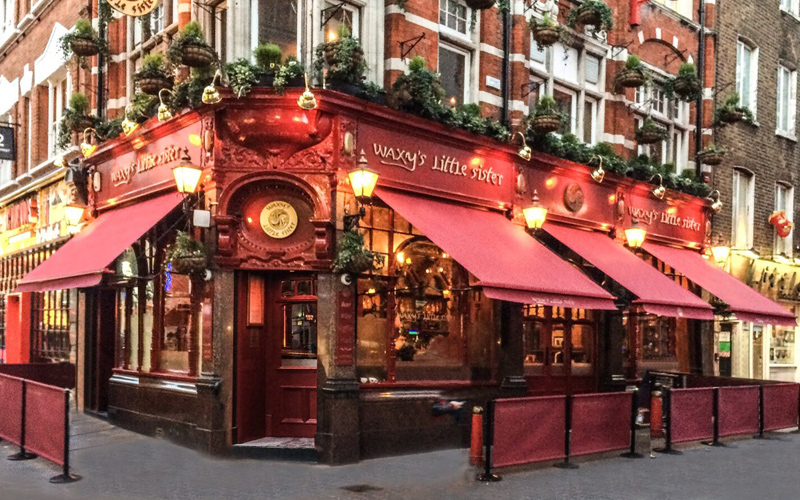 These four Deans traditional awnings have been installed at the vibrant Waxy’s Little Sister pub in Wardour Street. The crimson red of the covers is complimentary to the ambience of the Chinatown location and this theme is carried through to windbreak barriers that we have also installed. The barriers are mounted on to  powder coated black posts with barrier fabric being kept  rigid by the use of clips top and bottom and reinforcing bars held firmly in integrated pockets.  The detailed logo text of Waxy’s Little Sister has been applied to the traditional awning valances using our RAGS® graphics application process . Even the traditional awning boxes, manufactured from harvested hard wood, have been painted red to match the whole, using environmentally sound water based paint.  However, we have stuck firmly to traditional awnings black for the steel arms which have been formed around the pillars and powder coated black

Occupying a fascinating , 6-story, building on Rupert Street, Waxy O’Connor’s many rooms and floors are connected by labyrinthine spiral wooden stairs and a maze of passages. In a nod to its namesake, tree branches swirl and twine across the ceiling. Now we have Waxy’s Little Sister, a less lively establishment nearby in Wardour Street.  A more petite version of its bigger brother, the 2-storey venue offers a more relaxed environment with comfy sofas, romantic candle lighting, and elegant fireplaces. They don’t serve food, but the carefully curated Irish whiskey and folk music set the atmosphere. Why Waxy’s? Because Waxy O’Connor was a candle maker back in Ireland in the Eighteenth Century.

Wardour Street was known as Colmanhedge Lane up until 1682 when it was renamed after the land owner Sir Edward Wardour. In the late Twentieth Century  it became synonymous with emerging music and clubs such as The Vortex, The Marquee and St Moritz which sprang up featuring such luminaries as David Bowie. Siouxsie and The Banshees, the Slits and Adam and The Ants.  In the twenty first century Wardour St is more closely connected with Chinatown and features numerous Chinese restaurants and Chinese related businesses.