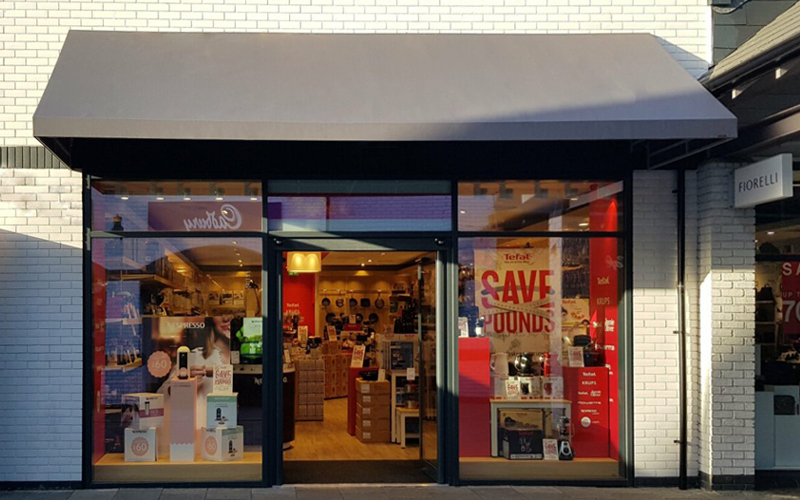 This RIB® wedge canopy by Deans has been installed at The Cheshire Oaks Designer Outlet located on the Wirral, Cheshire. The RIB® wedge canopy is constructed using our bespoke  system of manufacture which is a rigid assembly technique, unique to us. This particular  canopy demonstrates the extreme rigidity of construction in the exceptional width of the canopy which measures a full six meter span. This size has only been made possible by the RIB® wedge canopy manufacturing system which consists entirely of lightweight aluminium profiles fitted together without the use of degradable plastic parts, the construction ensures exceptional resistance to weathering. Note especially the clean lines of the cover which are uncluttered by any unnecessary dust collecting tape lines which are required fitting on non- RIB® systems.

Located off Junction 10 of the M53, The Cheshire Oaks Designer outlet is the largest outlet centre in the United Kingdom, and was the first designer outlet village in Europe when it opened in March 1995. The centre has a wide range of outlet stores run by large brands.  Cheshire Oaks remains the UK’s largest Designer Outlet. With over 360,000 square feet of retail space, comprising more than 145 boutiques, restaurants and cafés, Cheshire Oaks remains number one as  the UK’s premier Designer Outlet.

Outlets first appeared in the eastern United States in the 1930s. Factory stores started to offer damaged or excess goods to employees at a low price. After some time, the audience expanded to include non-employees. Until the 1970s, the primary purpose of outlet stores was to dispose of excess or damaged goods.  Today, Designer Outlets are very popular in the UK offering, not damaged goods, but generally recently outdated designs which are then sold at reduced prices.