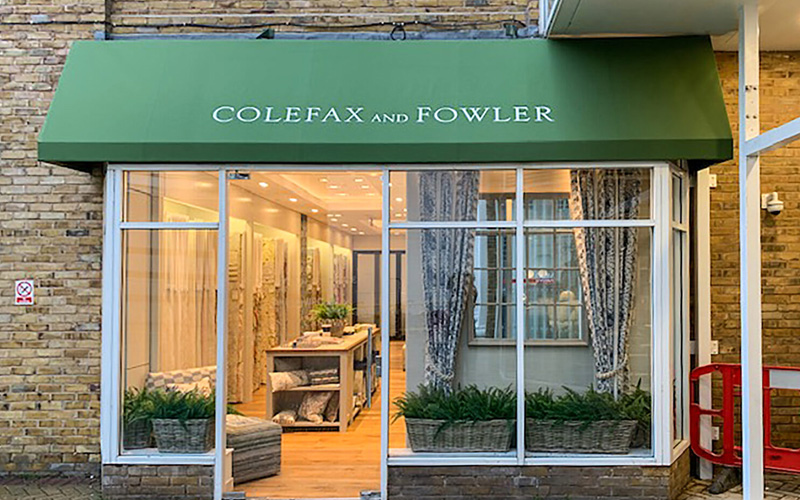 RIB® Wedge canopies by Deans have a simple yet stylish look but one the RIB® Wedge canopies, seen here at the Colefax and Fowler premises in Chelsea Harbour, has a surprisingly novel feature. One canopy has been recessed so that the left side of the canopy aligns perfectly with the sandstone brickwork of the shopfront. Only by skilful and sympathetic surveying of the building was this made possible and an alternative basic stand-off system of brackets was considered inappropriate for such a high end designer location.

The framework of our  RIB® Wedge canopies is constructed entirely from aluminium and avoidance of the use of plastic means that, environmentally, the product is entirely sympathetic with modern thinking. The face of the canopy has been neatly decorated through the use of our bespoke RAGS® branding system which has meant that the well known Colefax and Fowler graphic stands out sharply from the fresh apple green shade of the awning material which itself has been tightly stretched over the aluminium framework.

Lady Colefax began her decorating business in 1930. She was well-connected and her circle of friends and acquaintances provided her with clients which enabled her to become  a very successful businesswoman. In the same era through the 1920s and into the 1930s John Fowler had developed his decorating skills at the London firm of Thornton Smith and then in the decoration studio of Peter Jones, where he learned techniques such as painting Chinoiserie wallpaper by hand.

By the time Sibyl Colefax invited him to join her he had been working for a few years under his own name from premises on the King’s Road. The partnership prospered until today the number of staff of the small company founded by Lady Colefax, exceeds 300. In keeping with its heritage, the company’s head office remains in the heart of Mayfair.