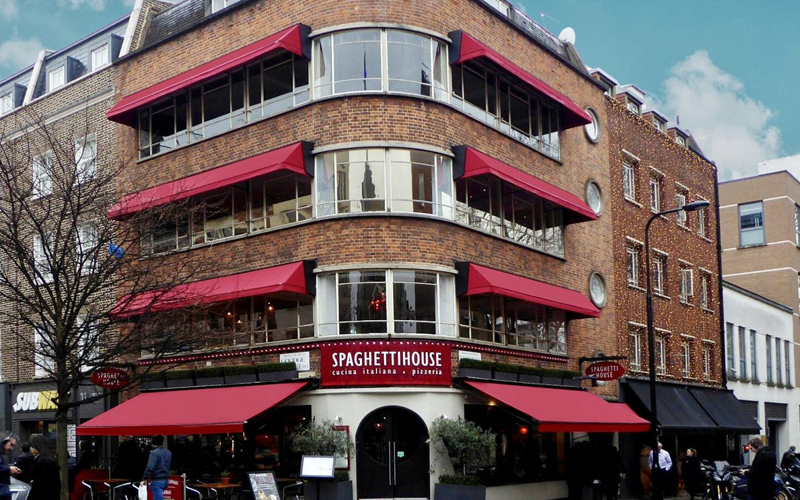 Restaurant awnings restauration is a key element of Deans work and 130 years of experience has given us the skills and experience to tackle virtually any type of awning, whether traditional or modern.  This complex job at the Spaghetti House flagship restaurant on Goodge Street in Fitzrovia is a fine example of us renovating multiple canopies and restaurant awnings over five different storeys. Working together with on site contractors, who were refurbishing elements of the building and fenestration, we have installed seven aluminium framed  wedge canopies which have been fitted within bespoke traditional timber weather hoods. The high level and wide widths of the wedge canopies has dictated that each has been installed with additional central spars, or legs, to provide extra rigidity and strength. On the lower level the original Deans shop blinds have been recovered and serviced and now match the new wedge canopies in the same Spaghetti house crimson fabric. Renovating awnings of all types is carried out by our own factory crafts people and the installation by trained, experienced, awning installation engineers. Renovating awnings can be as simple as installing a new cover or as complex as manufacturing new parts to replace those damaged by storm or, on occasion, vehicular damage.

Spaghetti House was started by two Italian chefs back in 1955 who were passionate about food and opened  their first  restaurant, London’s first-ever Spaghetti House, on the ground floor of this building on Goodge Street; The idea of inviting people to a ‘house’ rather than to a ‘restaurant’ reflected the warm, traditional Italian welcome. Spaghetti House’s motto, which still holds good today, was a simple one – ‘spaghetti, but not on toast!’. Today there are many Spaghetti House restaurants in London covering all the most fashionable areas  from glamorous Knightsbridge to literary Bloomsbury.

Goodge Street underground station has a Second World War deep-level air-raid shelter underneath it, and is one of eight such stations. From late 1943 until the end of the Second World War the Goodge Street shelter was used by SHAEF, the Supreme Headquarters Allied Expeditionary Force. The shelter has two entrances, one on Chenies Street and the other on Tottenham Court Road next to the American International Church.