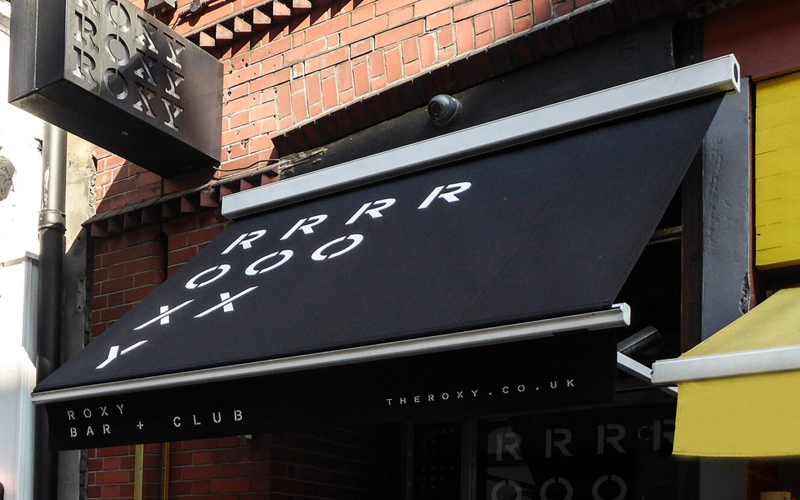 This Markilux 700 window canopy, with its square cassetted style and pivoting arms, has been  installed at The Roxy Club in Rathbone Place, Fitzrovia,  providing a focal recognition point for the business. Whilst not suitable for very large widths the Markilux 700 window canopy has a number of special advantages not the least of which is the facility of pivoting  down to 140° from the vertical which can provide exceptional solar shading where required. However, in this case the feature used to great effect by providing a sharp elevation, allowing the Roxy Club text to be clearly visible on the black canopy cover.  The branding to this Markilux 700 window canopy has been achieved using our bespoke RAGS®  process which ensures  a crisp definition to the text;  clearly shown on the close up image.

The piston arms  on the Markilux 700 window canopy  are filled with an inert gas which creates a rigid  triangulation of the awning mechanism providing the Markilux  700 window canopy with  high strength/weight ratio with arm sizes from 80mm up to 1500mm and widths of up to 6 metres, using split covers which are required over 4 metres.

The Roxy club has re-opened in a new style but reflecting the old ; with a popular, contemporary RnB scene and flashes of the Hacienda Rave culture, the Roxy provides a night to be reckoned with.  The Roxy’s interior is inspired by downtown New York whilst the lighting echoes the sleek, effortless style of Tokyo nights. Catering for both the after work imbibers , with a tempting happy hour, as well as the weeknight fun seekers and weekend clubbers.