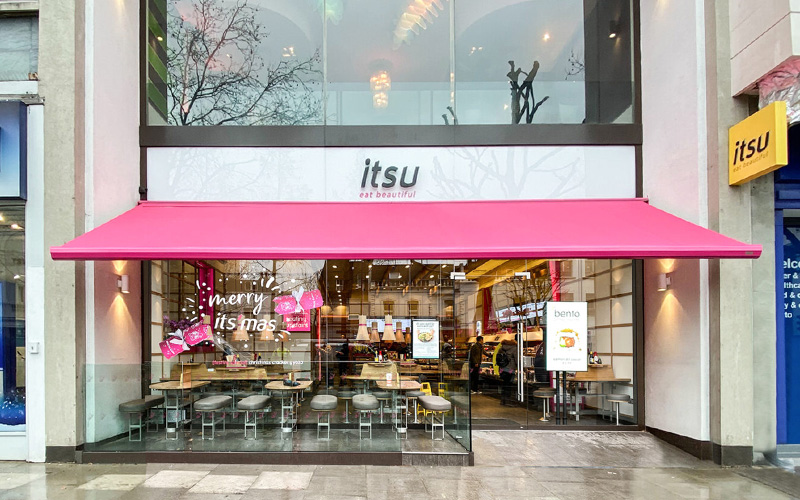 This Kenley commercial awning which we have recently installed at the Notting Hill branch of Itsu Restaurant has been powder coated in our own plant in the special corporate Itsu colour to match the awning fabric which has also been especially sourced for this long standing client of ours. The Kenley commercial awning is available with electric or manual controls and  a menu of automatic control options including sun and wind response. The awning is not limited to single units; the Kenley awning is available in one section, up to thirteen meters long, multiple units may also be linked to give even longer widths and junction covers may be specified to provide total coverage. Kenley commercial awning arm extensions are available from 1500mm up to 3500mm which means that large areas , suitable for outside dining are easily catered for.

Itsu is a chain of Asian-inspired fast food shops and restaurants, and is also a similarly themed a grocery company. The restaurant chain was founded by Julian Metcalfe, co-founder of sandwich chain Pret a Manger and founder of Metcalfe’s Food Company and opened its first location, in Chelsea,  in 1997. Today the chain has expended such that there are now over 90 Itsu restaurants covering the whole of the UK .