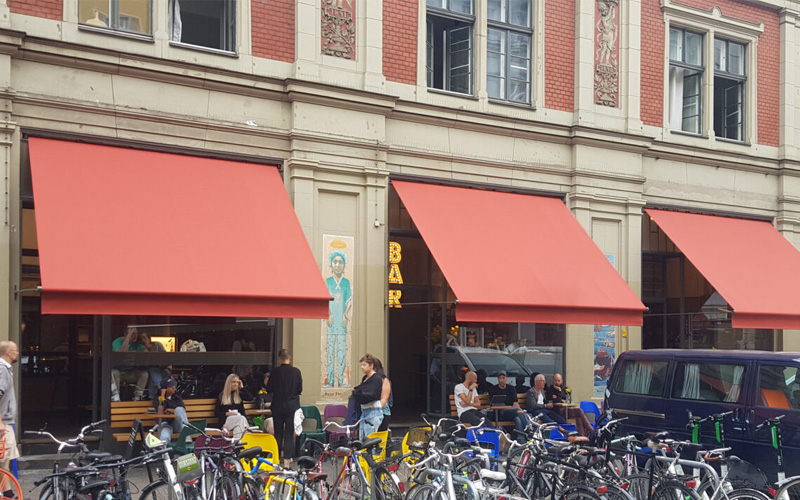 The Greenwich Awning® design is based on the classic French window coverings that have adorned the beautiful facades of Europe for centuries. However it has the advantage that the awning can be operated either manually, via a gearbox, or electrically, using wireless remote controls.  The Greenwich awning is a British product entirely designed and manufacture here in the UK. The uniqueness of the Greenwich awning could not be more  be evident than in this installation at Kaffee 9 in the “Markthalle” building in Berlin. The client saw the awning on our website and asked whether we could install them at their popular Berlin cafe as nothing similar was available in Germany. We were delighted to be able to help and went so far as to send a surveyor to Berlin, who established the suitability, then our installation team carried out the work on site, which caused considerable local interest! The awning boxes have been carefully integrated into the historic building facia and fabric covered front profiles complete the smooth transition to the weighted valances.

From a small stand-up café to a café with an attached roasting house – over the last five years, the Kaffee 9 team has developed a reputation as the mediator of a better coffee culture. Since the autumn of 2016, a roasting drum has been located at the café which supplies, not only the Kaffee 9 and the Markthalle Neun, but also interested collaborators, friends and restaurateurs beyond the immediate area.

The Markthalle (lX) 9, also called Eisenbahnmarkthalle , is one of the formerly 14 urban market halls in Berlin , built at the end of the 19th century in the former central districts of Berlin. Replacing the previously open markets it guaranteed better sanitary conditions and efficient supply of the growing population. Opened in 1891 and, after a hesitant start in the 20th century, its use was steadily increased. In the 1990s, major food discounters took more extended sales areas, however, since October 2011, three private operators who have successfully revived the concept of the diverse small-scale offers in the hall. Every two years since 2014, the Markthalle IX organizes the Festival “City, Land, Food”.