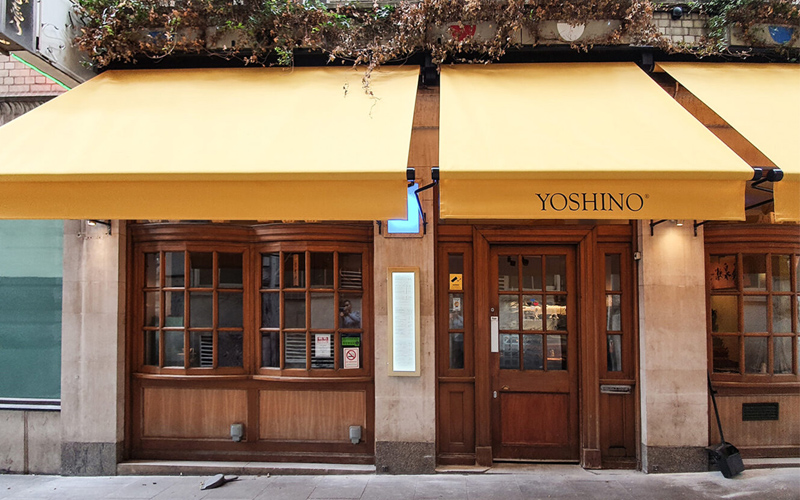 The Greenwich Awning® design is based on classic French window coverings that have featured the beautiful facades of Europe for centuries and has been developed by us to be the perfect foil for traditional British buildings where the classic design is supported by robust construction. The Greenwich Awning® has elegant, clean lines that are perfectly suited to boutiques, hotels and historical buildings with the advantage that the awning can be operated either manually, via a gearbox, or electrically, using wireless remote controls.  The Greenwich Awning® is a British product entirely designed and manufacture here in the UK which makes it unique amongst its Continental contemporaries. The manually operated awnings you see here at  Yoshino in Piccadilly, Mayfair, are further enhanced by a simple text graphic applied the valance of the central awning through the use of our RAGS® exclusive branding process.

Located just off Piccadilly, Yoshino was easy to miss until we installed these three new Greenwich awnings.  This sushi bar’s success over the years has been a guaranteed supply of market-fresh fish; the company is also a seafood supplier. For years, the winning formula here has been a small selection of sushi sets. The colourful chirashi – topped with shredded nori, mange tout and omelette, as well as the expected sashimi slices – has always been a favourite, and the salmon on nigiri has silky-smooth flesh that melts in the mouth.

Piccadilly is named after the home of the original owner of the area, Robert Baker, Piccadilly Hall.  What we now call Piccadilly in the 1600’s was known as Portugal Street and the name Piccadilly was only really adopted at the end of that century. Today, of course Piccadilly is regarded as one of London’s principal shopping streets, hosting several famous shops. The Ritz Hotel, Park Lane Hotel, Athenaeum Hotel and Intercontinental Hotel are located on the street, along with other luxury hotels and offices.