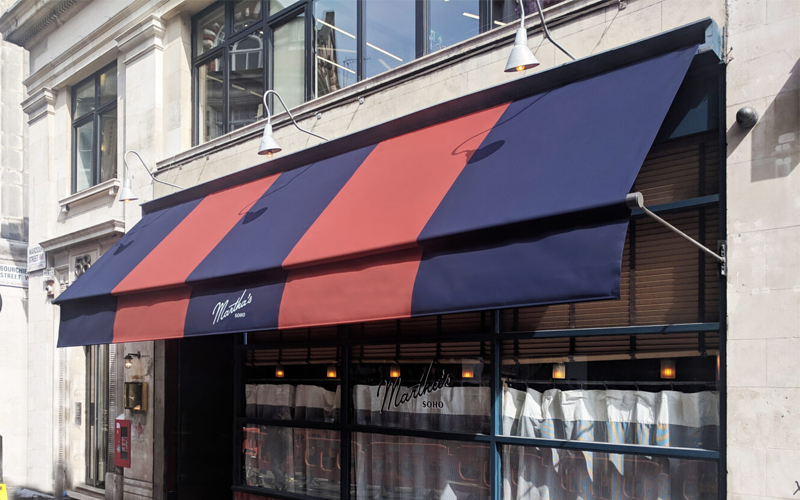 Greenwich awnings are a modern version of a traditional system with the advantage that the awning can be operated either manually, via a gearbox, or electrically, using wireless remote controls.  The unique nature of the design means that the Greenwich awning is immensely strong yet the careful use of modern materials has avoided the more cumbersome look of  other pivoting awnings. This Greenwich awning at Martha’s, of Wardour St, Soho, has been cleverly manufactured to present a New York style aspect with broad fabric stripes in a style typical of American awnings. Additionally the distinctive “Martha’s” Logo has been neatly applied to the extra long hanging valance using our bespoke RAGS® branding process.  The awning case is made in the traditional way with harvested hardwood and finished with a water based paint whilst the arms and front profile are powder coated to present a weather resistant finish.

Some New York pizzaz has come to  Soho as Martha’s opens its doors on Wardour Street, taking over the space that Jackson + Rye recently vacated. Food-wise, there is a menu of American classics – which includes honey truffle fried chicken, truffle mac and cheese, oysters, shrimp cocktail, steaks, chipotle creamed corn and pasta dishes (as well as vegan options). These are backed up by classic cocktails as well as live jazz, drag acts and more besides.

It will surprise many people to know that the bustling area of London known as Soho was once a Royal park developed from farmland by Henry VIII in 1536. It became a parish in its own right in the late 17th century, when buildings started to be developed for the upper class, including the laying out of Soho Square in the 1680s. The aristocracy had mostly moved away by the mid-19th century, when Soho was particularly badly hit by an outbreak of cholera in 1854. The Cholera epidemic was recently featured in one of the Episodes of the TV series Victoria, featuring the physician, John Snow.