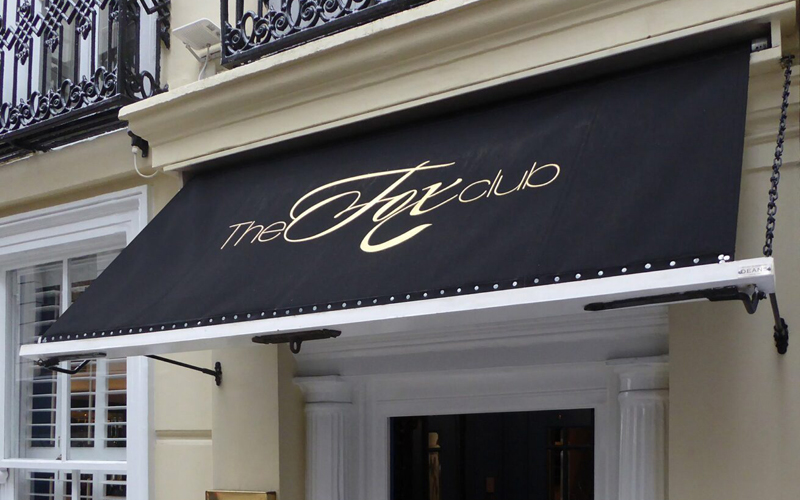 Gold Leaf and gilt decoration is not confined solely to historic monuments and the bindings of precious books. In this case the branding on this traditional Deans   awning has been applied by our craftsman to provide dignity and longevity to the fabric on this fine old establishment, The Fox Club in Clarges Street, London.   The small, neat shop awning itself reflects the style of the building through its bespoke timber box,  constructed from harvested hardwood, combined with traditional pivoting ‘shoe’ arms which are fixed to the building with appropriately decorative mountings.  The gold leaf application is a hand crafted method  using a five stage process which starts with the digitised setting out process we call the RAGS™ bespoke system of awning branding. The graphic design is then transferred on to the awning fabric through various phases of application, adhering strictly to the traditional method of hand applied gold leaf. The result is a dignified logo which will stand the test of time and reflect the quality of the location for years to come.

The Fox Club, in Clarges Street is steeped in history as a glance at the blue plaque on the wall will testify. The blue plaque proclaims the statesman originator of the name, Charles James Fox, who lived there in the eighteenth century.  The club also duplicates as a bijou  hotel which is a departure for private members club of this type  and is an antidote to the many of Mayfair’s traditional establishments. The Fox Club is a fun and friendly place to unwind with friends, eat fine food and even spend the night in extravagant luxury.

Charles James Fox (24 January 1749 – 13 September 1806), given the title of  “The Honourable” from 1762, was a prominent British statesman whose parliamentary career spanned 38 years of the late 18th and early 19th centuries.  He is remembered as an anti-slavery campaigner, a supporter of the French Revolution, and a leading parliamentary advocate of religious tolerance and individual liberty.  Clarges Street on which the Fox Club is located, was built in the early 18th century and named  after Sir Thomas Clarges who was a politician at the time of the Restoration of the Monarchy.