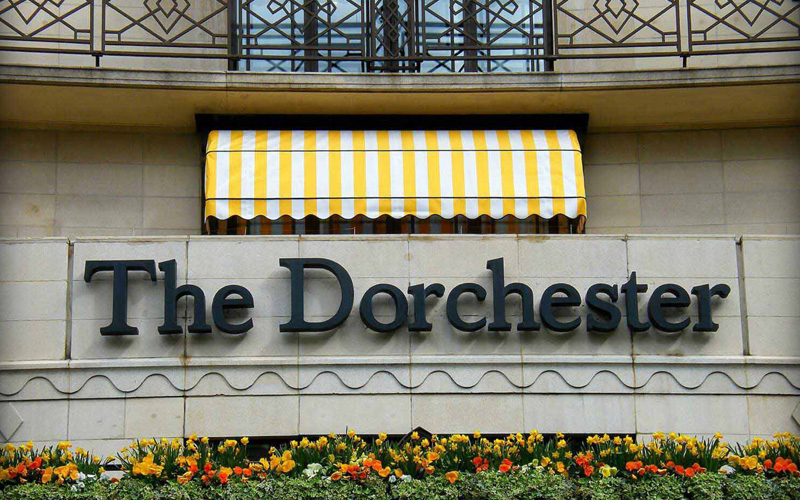 Renovating canopies or awnings can be as basic as installing one  new cover on a residential patio awning or providing new covers and renovating the frames of the eighty Dutch style canopies which can be seen from Park Lane and are located on the frontage of the iconic Dorchester Hotel. Whether the job is a simple straight forward new cover or an ancient traditional blind or an awning requiring total re-construction our facilities mean we are almost always able to save the casualty and return it to its previous pristine state.

We are often able to source or replicate old or discontinued parts to replace those damaged by storm or, on occasion, vehicular contact. Renovating canopies and awnings is not a job to be taken lightly, the older products, such as the Deans shop blind, contain very heavy coil springs which, if not handled correctly, can cause physical harm.

During the 11th century, Mayfair was known as the ‘Manor of Hyde’ and owned by William the Conqueror. He gave the land to Geoffrey de Mandeville, Constable of the Tower of London, who bequeathed it to the canons of Westminster Abbey. In 1792 the Earl of Dorchester, Joseph Damer, bought a house which stood on the exact spot where our hotel now stands. His house became known as ‘Dorchester House’, which explains where the name of the hotel comes from. In 1853 Robert Holford built a grand Italian palazzo-style house to replace the original, but it kept the same name. By 1910 Dorchester House became the American Embassy and was later used as a hospital during World War I, before being demolished in 1929. Sir Robert McAlpine created a vision for what he considered to be the perfect hotel. His vision became a reality when The Dorchester opened its doors on April 18, 1931. The state-of-the-art design was built in record time over 18 months, at the speed of a floor a week, to become the world’s first hotel to be constructed from reinforced concrete.