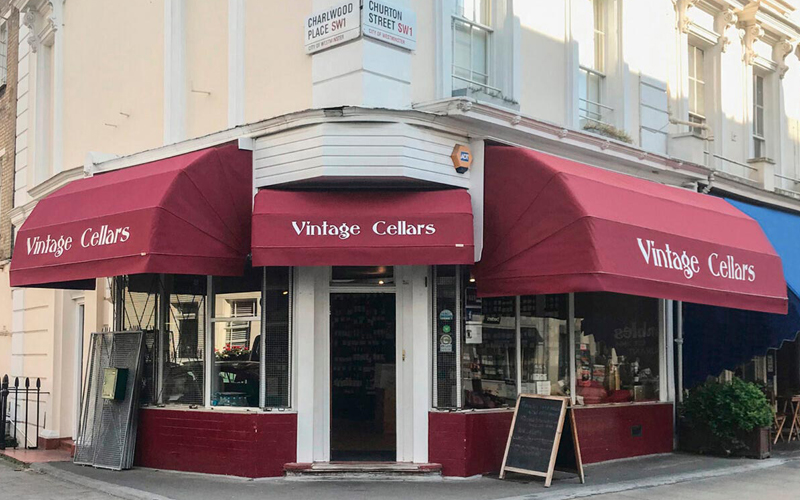 The Dutch blind or Dutch canopy has been a staple on the high streets for many years though it seems the reason for prefix seems to be lost, in fact in some parts of the country it is known as a French canopy but then in France they are an “auvent” and in Holland a “luifel” so quite where this all begins seems lost in the mists of time. Whatever the origin, in the UK we refer to them as Dutch blinds or Dutch canopies and these are typical examples which we have installed at the Vintage Cellars outlet on Churton Street in Pimlico. Though originally made with timber frames we now manufacture our Dutch blinds in aluminium which removes the need for regular painting. Back in the pre-war days Deans would collect Dutch blinds from customers in the autumn and store them under the stands at the Fulham FC Craven Cottage stadium as John Dean, our Founder, was the Club Chairman at the time. Then in the spring the canopies would be dusted down and reinstalled on site. Quite apart from the fire hazard presented by this practice today modern materials mean our Dutch blinds are far more resistant to weathering and can remain in place all year round. This  particular installation is at Vintage Cellars and we have  applied graphic text to the canopies through the application of our unique  RAGS®  branding process.

Vintage Cellars  are an independent Wine Merchants who have been established in Pimlico for over 20 years. Their philosophy  has remained unchanged and is as relevant as when they first started trading, namely, find great quality wines at competitive prices from smaller producers which their customers will enjoy.

Pimlico is an area of Central London in the City of Westminster. Like Belgravia, next to which it was built as a southern extension, Pimlico is known for its garden squares and Regency architecture. The area has over 350 Grade II listed buildings and several Grade II listed churches. In the centre of  Pimlico is a grid of residential streets laid down by the planner Thomas Cubitt beginning in 1825, and now protected as the Pimlico Conservation Area.