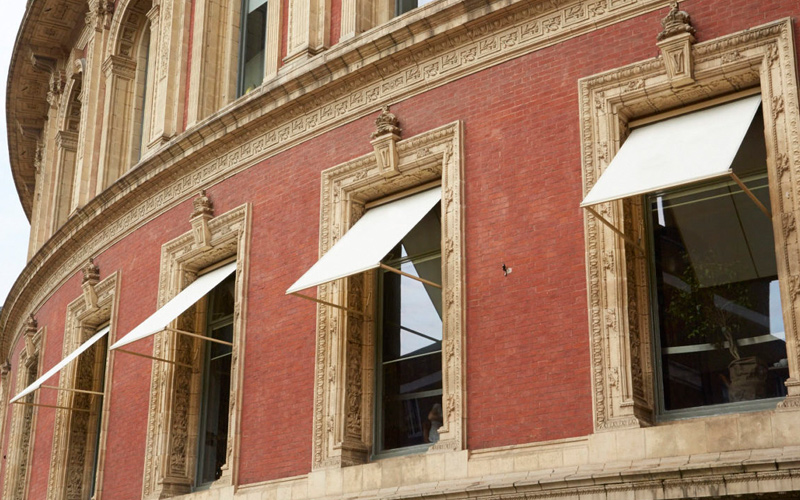 Drop arm awnings are ideal in special circumstances where shade and solar control are a major requisite and large horizontal projections are not, either wanted, nor possible due to the window location. The drop arm awning is retractable so it can be closed when not in use or in particularly inclement weather. Our drop arm, the  Markilux 700/800 series, has its own extruded aluminium housing, which can be powder coated to any RAL reference,  ensuring complete protection against the elements.

The front profile of the drop arm awning  is fixed to side arms which fall from a pivot point with  strong, inert-gas filled, pneumatic arms to maintain fabric tension. The arms can extend from 600mm up to 1500mm  with others sizes on special request. If required, the arms on the Markilux system, can also drop below the 90 degree horizontal to given even more shade.  Operation can be manual or electrically operated by remote control. These particular drop arm awnings were installed by us at the Royal Albert hall at high level and are automatically controlled via a wind sensing device for maximum protection.

The Hall was designed by civil engineers Captain Francis Fowke and Major-General Henry Scott of the Royal Engineers and built by Lucas Brothers. It was completed in 1871 and the designers were heavily influenced by ancient amphitheatres. The Cirque d’Hiver in Paris was seen by the designers of the Hall as a design to better.  Constructed primarily of Fareham Red brick, with terra cotta block decoration, the  dome on top was made of wrought iron and glazed. When the dome was finally erected there was only a small staff on site as it was feared it might collapse (!) fortunately, for the intrepid workers, this did not occur and all was well.