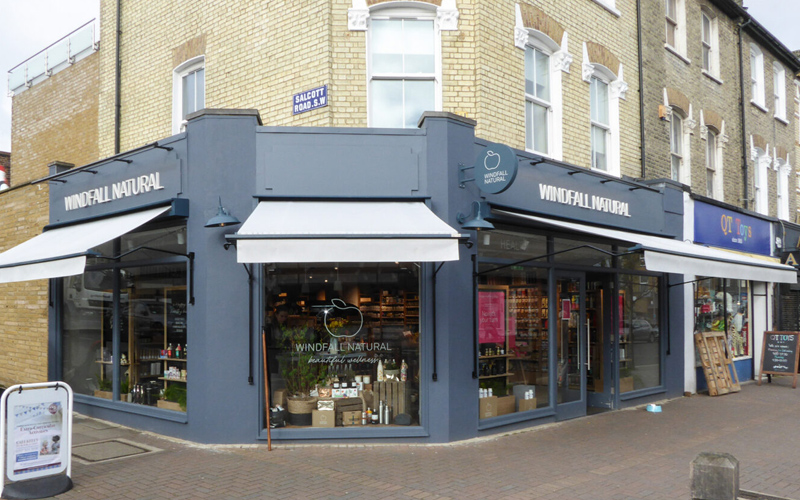 Deans shop blinds have been a familiar sight on our high streets since the late nineteenth Century and Deans Blinds, founded in  1894, have for all this time been a primary manufacturer and installer of this iconic awning. The Deans shop blind  is still constructed to the same timeless standards as before but we are now able to incorporate modern, more robust, finishes to make the product even better. The arms of the Deans shop blinds are now shot blasted and  powder coated in our own plant, rather than hand painted with lead based paints as they would have been. Equally, the hard woods we use are from harvested sources and are carefully finished using the latest water based paints which give that traditional look without impacting on our environment. Though not utilised here on this job the Deans shop blind can be  branded through means of our bespoke RAGS® bespoke branding process in any company logo in single or multiple shades from the pantone palette of colours.

Independent wellbeing retailer Windfall Natural has moved to a new site, and introduced a new store design as part of its plan to become a leader in the sector. Founder Daniel Hunt launched Windfall Natural in 1997 on Turnham Green Terrace in London. The store has now moved to a 93 sq m unit which is located just 100m away The new store has been designed by Dalziel & Pow, and is intended as a flagship branch for the expanding brand. Housed in a prominent double-fronted unit close to Chiswick High Road, the traditional store exterior features our silver grey Deans shop blinds which frame an open view of the inviting interior.

Along with the Industrial Revolution and the famous Battersea Power Station, Industry was the focus of development for the Thameside suburb of Battersea for nearly two centuries. Industry declined and moved away from the area in the 1970s, and local government sought to address chronic post-war housing problems with large scale clearances and the establishment of planned housing. Today factories have been demolished and replaced with modern apartment buildings.