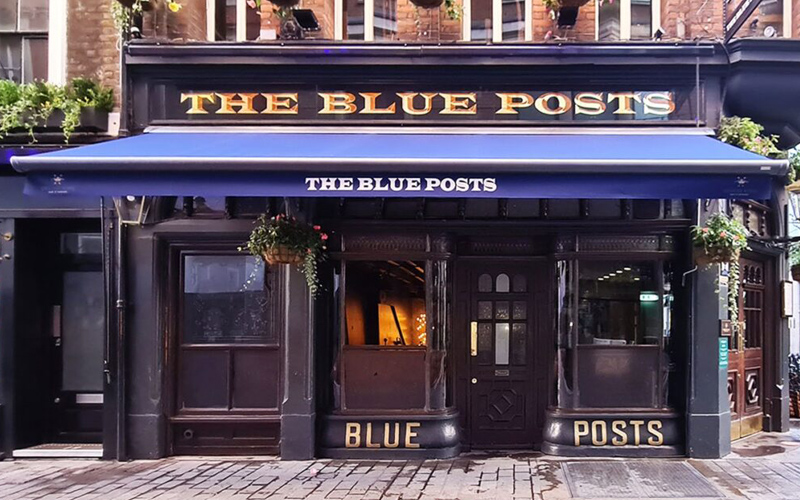 These two Markilux Model 1600 commercial folding arm  awnings, installed at The Blue Posts, Kingley Street, have been boldly branded in the logo style of the client to make a clear visual statement. The branding has been carried out using Deans unique RAGS® graphic process which can handle logos of any size with an impressive degree of accuracy and depth of colour. Model 1600 commercial folding arm awning  is one of our most robust commercial folding arm awnings incorporating a powder coated aluminium framework which, in this case, has been coloured in metallic grey to contrast  with the blue of the awning cover.

The Markilux Model 1600 commercial folding arm awning is a robust, heavy-duty system that comes with a protective hood which neatly encompasses the cover in the retracted state thereby protecting it from the elements.  The awning is available with  manual or electric operation, recommended, and can also be equipped with automatic devices such as sun or wind sensors.

The Blue Posts is a Greene King pub which is well known for its hanging sign depicting a lady being carried in a sedan chair, which give some indication of the length of time this pub has been at this location. You will  always find a table no matter how bustling the rest of Soho might be and good food is available all day. The handsome Victorian exterior does draw its fair share of tourists, seeking an experience of the authentic British pub.

It is said that blue posts were once used to demarcate the boundary of a royal hunting ground. Another explanation, the clue being in this pub sign, has blue posts as the forerunners of taxi ranks. Sedan chairs could be hired from any location displaying a blue bollard. We don’t really know for sure but the posts may have just mean a way of depicting business types or locations. We prefer the romantic idea of the predecessor to the London cabbie.