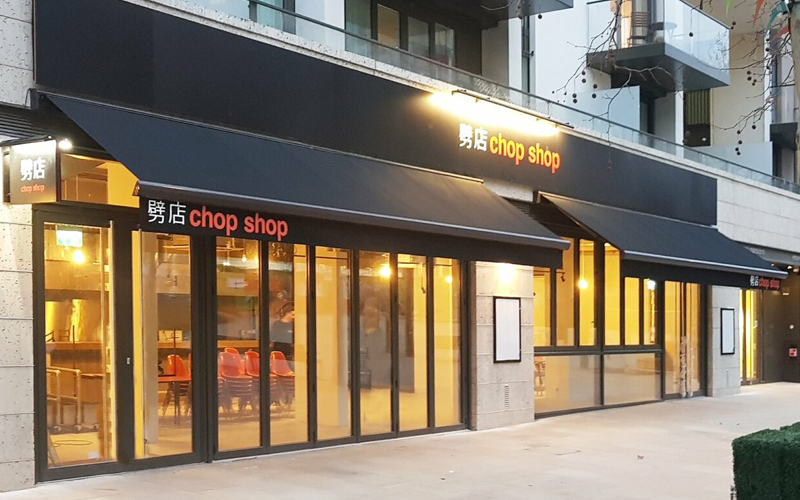 These two Kenley commercial awnings have been installed at the new Chop Shop Restaurant in East Village, Stratford East, London. The Kenley awning has been a first line commercial awning of Deans for over twenty five years and continues to be a play a significant role in  the commercial awning market. The awning is assembled by us in our London factory which means that fast deliveries are possible and a full maintenance backup is guaranteed. The Kenley commercial awning is available with electric or manual controls and  a menu of automatic control options including sun and wind response. The frames on this particular example at the Chop Shop have been powder coated by our works in striking black to match the dramatic impression created by the matching covers.  Additionally, the valances on these restaurant awnings have been branded in the distinctive client orange through the use of our unique RAGS®  branding process.

East Village is a housing and commercial development in Stratford East London which was designed and constructed as the Olympic Village of the 2012 Summer Olympic Games. It has been converted for use as a new residential district, complete with independent shops, bars and restaurants. The housing was originally the accommodation provided for Olympic athletes but the  temporary partitions installed during the games were removed to create a range of one to five-bed homes, ranging from apartments to townhouses. The hotel style designed rooms were converted to include kitchens. 1,439 private homes are now  let on a rental basis, instead of being sold.

In the Victorian era Stratford was highly industrialised but, during the 20th century, fell into steady decline exacerbated by the closure of the Royal Docks. The 2012 Olympics reversed this decline and now Stratford supports a thriving retail economy and is the site of a retail and leisure destination of the highest order with the Olympic Stadium, O2 Arena, Velodrome  and the London Aquatics Centre among the key attractions.