The Deans Traditional Awning – A work of art 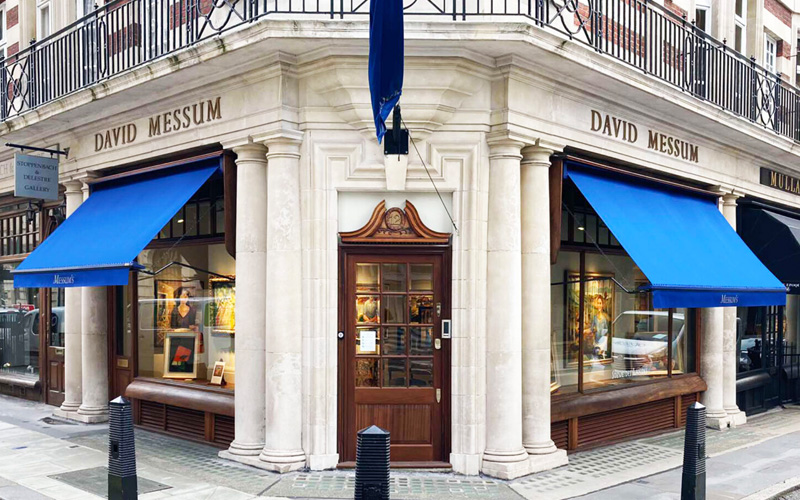 Within the blinds and awnings industry the Deans traditional awning is, in its own way, a work of art. From the crafted hardwood used in the construction of the traditional awning box, which has been patiently hand painted, through to the perfect alignment of the authentic galvanised cover tacks there is something very special very about this awning. These traditional awnings, installed at David Messum Fine Art in Knightsbridge, have been made in virtually  the same way they were back in 1894 when John Dean created the very first Deans traditional awning. However, today we are able to take advantage of some modern technology, without compromising the traditional  look of the original.

The hard wood awning box, front lath and cover tacker are now painted with environmentally sound, water-based, paint rather than the rather hazardous lead based variety used previously. The metal work of Deans traditional awnings  is also treated differently and we take advantage of our very own powder coating plant to finish this part of the awning in a resilient, durable, blemish free way.  The UV resistant fabric cover may be selected from a wide range  from our fabric library which comprises over three hundred diverse shades.

Messum’s Fine Art has long held a powerful reputation as one of the country’s leading art galleries, not only a pioneer in the field of British Impressionism and the Newlyn and St Ives Schools, but also a specialist in exhibiting contemporary British art and sculpture. This gallery, with a prestigious space over two floors, offers the chance to view works of art by 19th and 20th Century British artists, on whose names the reputation of the company was founded, together with a regularly changing exhibition program focusing on the Contemporary Artists and Artist Estates represented by David Messum.

The original bridge, after which Knightsbridge is named crossed the  River Westbourne, a tributary of the River Thames. Many of these small rivers and streams still run under the London streets but the river Westbourne is unusual in that it runs over  the platforms of Sloane Square tube station and the retaining channel can be seen from the platform itself.