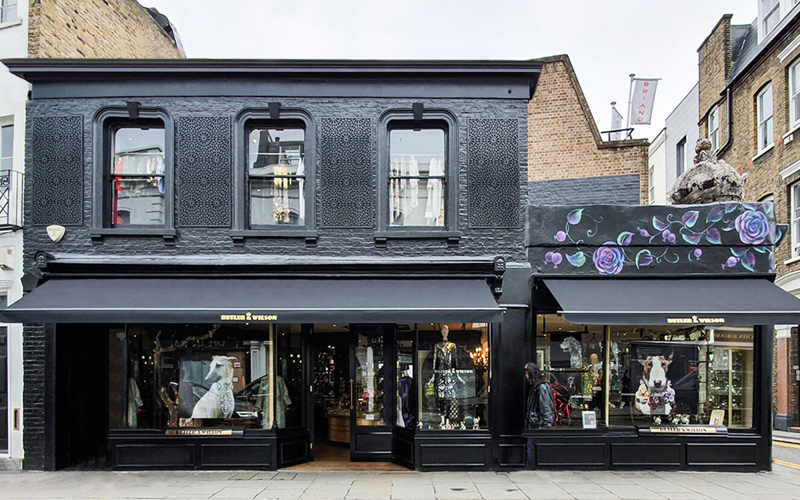 These two Classic folding arm awnings installed at Butler and Wilson, on the Fulham Road, South London, are impressive examples of the suitability of the Classic folding arm awning to give unbroken cover over a particularly wide shop frontage. The Classic awning is an unfussy design which belies the robust construction required of a high street installation. Electrically operated by remote switch or simply wound on a hand operated crank the Classic awning is simplicity itself to control. However, in this Classic awning installation there is a special feature which is perfectly suited to the business conducted at Butler & Wilson Antique Jewellery. The bespoke branding to the valances has been formed in 22 carat Gold Leaf which has been expertly hand applied  by our skilled in house crafts person.  Gold leaf branding is, by its very nature, more costly than graphics which have been created in ink or paint. However, they pay for themselves many times over by the solidity of design and the fact that the ravages of time and environment will never dim the glister of genuine gold leaf.

In 1969 Butler & Wilson began selling antique jewellery from their stand in their Antiquarius Market in the King’s Road, Chelsea. Then, in 1972, they opened their first shop on The Fulham Road. Later, in 2014, Butler & Wilson Celebrated 45 Years of trade. The business has over their history introduced other items to their ranges of fashion jewellery including a special range of Vintage Clothes & handbags, and an exclusive Men’s Jewellery Collection.  Another landmark was that one of the founders was commissioned to design The Regent Street Christmas Lights in 1979 , which proved so successful that they were used again in 1980.

The Fulham Road is known for its numerous antique dealers and specialist interior furnishing shops, while designer couture outlets latterly arrived at the eastern end. The section nearest the cinema is known as The Beach, and is home to various trendy bars, pubs and clubs.