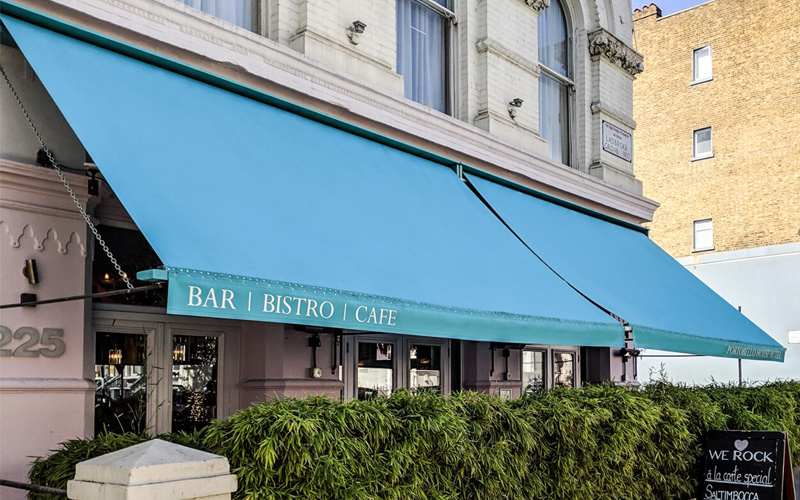 These two Traditional Deans awnings have been installed recently at the Portobello House boutique style Hotel on Ladbroke grove in the Notting Hill area of West London. The clear, aqua coloured awning fabric has been co-ordinated with the boxes of the shop awnings which, in turn, are constructed from licensed, selectively sourced hardwood; these having been hand painted, using environmentally correct water based paint, to blend harmoniously with the historically sensitive hotel facade. Branding has been tastefully applied to the weighted awning valances in white using our RAGS® graphics process which ensures accurate rendering of logos or text. The Deans traditional awnings have been installed closely together to provide a continuous effect providing maximum cover and comfort for patrons enjoying their drinks on the patio area

Situated in the picturesque neighbourhood of Notting Hill, The Portobello House Hotel offers the perfect location to enjoy the best sights of London. The bar of the Hotel offers an impressive cocktail menu with their carefully chosen wine list including some from exclusive wine club collections, a selection of draught and bottled beers, as well as and excellent selection of spirits teas and coffees. The talented resident chef has created a menu of inspired seasonal dishes, Mediterranean tapas, including some wonderful English classics. Whether you want to enjoy a quick bite whilst watching the world go by or relax into a long dinner, they have the ambience and the food to match your mood and pace.

Ladbroke Grove  is named after James Weller Ladbroke, who developed the Ladbroke Estate in the 1840s. Ladbroke Grove features predominantly in the pop culture of the late twentieth century in numerous situations such as the scene of Van Morrison’s 1968 song “Slim Slow Slider” from Astral Weeks, it is mentioned in the 1970s pop hit “One Man Band” by Leo Sayer. The Pulp song “I Spy” features the line “your Ladbroke Grove looks turn me on”. The Blur song “Fool’s Day” also features Ladbroke Grove in its lyrics. More recently The UK rapper AJ Tracey’s hit “Ladbroke Grove” is named after the road of which he is from; it peaked at number 4 on the UK singles chart.

The UK rapper AJ Tracey’s hit “Ladbroke Grove” is named after the road of which he is from; it peaked at number 4 on the UK singles chart.