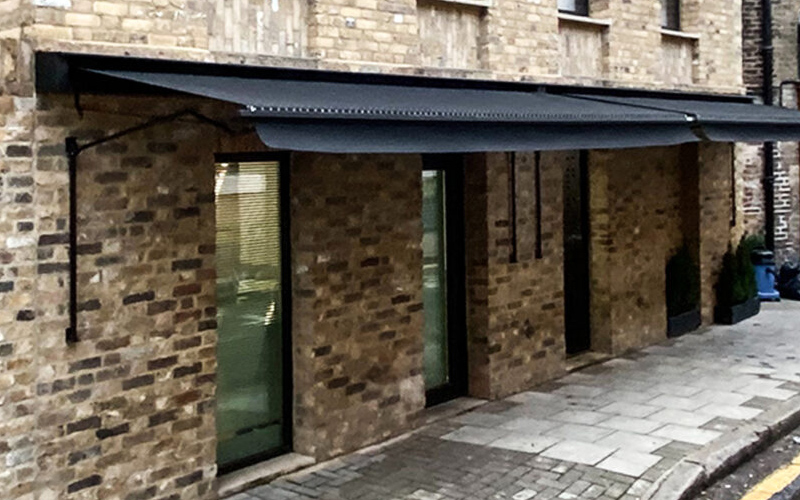 Traditional Deans shop blinds are not just for shops! The name has remained since we started to install these shop blinds in London back in the nineteenth century but the design has also become synonymous with other types of Victorian establishments, such as public houses. The job here at The Sekforde in Central London is no exception. The two shop blinds installed on this site are, at first sight, quite standard however the low fixing height required that our engineers manufacture the arms in such a way that a safe head clearance was achieved.

Whilst there are specific regulations in most city planning departments in  respect of headway clearances on pavements the origination of the most common headway (as it is called) originates from an interesting set of circumstances. Eventually the common clearance was set at 2100mm (or seven feet in old money). Reputedly this rather arbitrary dimension was achieved by the ability of a policeman to pass beneath the extended awning front rail without it conflicting with the tall helmet most patrolling bobbies were obliged to wear. In London of course they still do.

The Sekforde stands at the junction of two historic and unspoilt early 19th century streets (Woodbridge Street and Sekforde Street) in the heart of Clerkenwell, London. The historic building occupied by The Sekforde has been tied to a beautiful new extension by a striking glass atrium. The restoration captures all the charm of a late Georgian pub but also offers the very best in modern facilities. It is a privately owned freehold that, as such, offers a large variety of craft beers,  lagers, ales and wonderful wines.

At The Sekforde they are very proud of their ground source heating and cooling system. This system means they use roughly 15% of the energy of a conventional pub of this size. Using this system as a starting point the objective of the owners  want to become the greenest pub in London and they are constantly aiming to eliminate all plastics and food waste.