Traditional Deans Awnings at The Roebuck 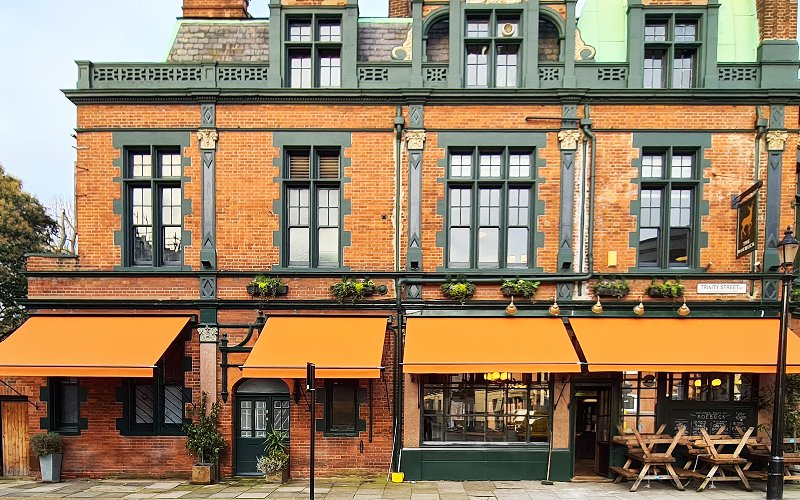 Deans Traditional Awnings, installed here at the Roebuck, are a perfect complement to our history. The beautiful building was constructed on Great Dover Street in the 1890’s at about the same time as John Dean was establishing his blinds business, Deans Blinds of Putney. The four awnings follow the same course of manufacture as were the original Deans traditional awnings with environmentally harvested hard woods (sourced through the Forest Stewardship Council). The steel  component parts of the Traditional Awnings  have been  powder coated for maximum weather resistance.  The main awning cover and valance are in a traditional orange colour which subtly blends with the London brick of the building. The Deans Traditional Awning is, despite or perhaps because of, its long history one of our most robust traditional awnings. We are frequently asked to recover our awnings of this type which have been installed by us as much as fifty years ago.

The Roebuck public house is a Grade ii listed building on Great Dover Street with an exterior principally of red-brick with a slate mansard roof culminating in a green copper pavilion roof with curved sides to the south end. In an eclectic free style with Jacobean, Dutch and Classical features. The pub  replaced a previous public house of the same name. It is unclear whether or not the building shown on the 1878 Ordnance Survey map is this one, or its predecessor.

Great Dover Street’s name came about very simply an improvement on the original road out of the centre of London to the south-east ports. It was created as a turnpike improvement in 1750 for traffic as a by-pass for the ‘old’ Kent Street/ Kent Road route out of the Borough of Southwark.

In 1963, £50,000 was found by police in a phone box in Great Dover Street. It was part of the proceeds from the Great Train Robbery and had been left by an intermediary acting for Buster Edwards.

To find out more about our solutions for Pub Awnings.