Traditional awnings for Coach and Horses 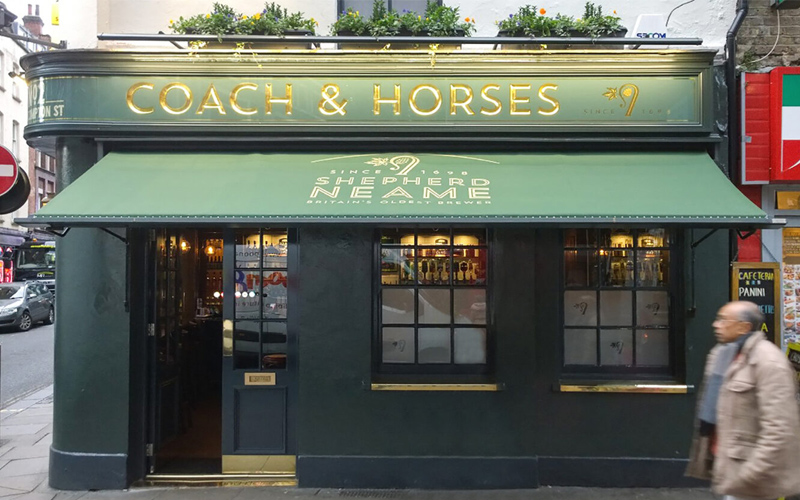 Traditional is one word you can really associate with both Deans Blinds and Shepherd Neame. Though this traditional brewer is two hundred years older than us our one hundred and thirty years still qualifies Deans as a true Traditional blind maker. This traditional Deans shop blind, which we have just installed at the Coach and Horses, in London’s Soho, is typical of this type of job with its hardwood box carefully painted to match the shopfront. Robust steel arms have been powder coated in our own plant to a resilient, long lasting, finish.  The fine Shepherd Neame Logo and accompanying script have been applied through the means of our special RAGS® branding process which has ensured accurate colour reproduction and sharp graphic outlines. The fabric cover has been  are treated to be both UV and soil resistant elements to give a long lasting appearance and both of these properties are accomplished through the means of environmentally safe applications.

Shepherd Neame is Britain’s oldest brewer, having been established in 1698. They are dedicated to brewing great beer and running the best pubs. Just as their beers span the range of classical, heritage and modern, so the pubs, such as the Coach and Horses, reflect the character and diversity of their locations. With more than 300 pubs throughout London and the South East, from the historic heart of the City to the Kent coastline, there is a Shepherd Neame pub to suit all tastes.

Beer in England has been brewed for hundreds of years. As a beer brewing country, England is known for its top fermented cask beer (also called real ale) which finishes maturing in the cellar of the pub rather than at the brewery and is served with only natural carbonation.

Beer has been brewed in England for hundreds of years and many styles now exist including  bitter, mild, brown ale and old ale. Stout, porter and India Pale Ale were also originally brewed in London. Lager style beer has increased considerably in popularity since the mid 20th century. Other modern developments include consolidation of large brewers into multinational corporations; growth of beer consumerism; expansion of microbreweries and increased interest in bottle conditioned beers.