Shop blinds installed at The Butcher’s Hook in Fulham 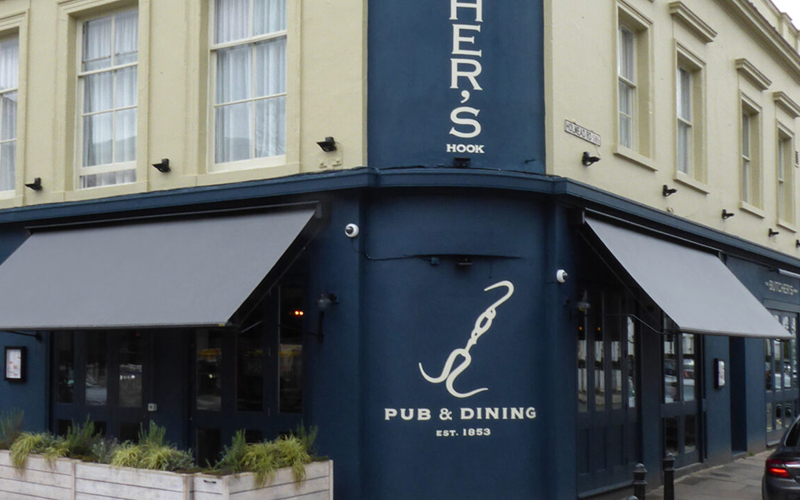 Shop blinds have been traditionally installed on butchers shops and often these shop blinds are actually referred to as “butchers blinds”. The description of the shop blinds  on this Fulham public house is particularly apt as it is the popular Butcher’s Hook on Fulham Road in South West London. It can be seen on the images  that the powder coated arms of these shop blinds have the traditional “set under” bends. These bends are not formed for decorative purposes but are a necessary requirement for the front lath to be able to close back correctly to the awning box. Both the awning box and front lath have been constructed from harvested hardwood, sourced only from licensed timber merchants. The timber has then been sanded and hand painted with a durable water based paint to present a high quality finish which compliments both the UV resistant awning fabric and the colour scheme of the building itself. This type of shop blind can also be recessed into an existing shop front reveal and, where this is the case, it is advised that clients contact our design team at an early stage for this type of installation.

The Butcher’s Hook pub is located on the border of Fulham and Chelsea, in south west London. It opened in 2005 and, over the years, has established itself as a hub for the local community – a real neighbourhood pub and restaurant. The pub is located just a few minutes from Fulham Broadway and close to Stamford Bridge. The Butcher’s Hook is home to an historical moment in sporting history as over one hundred years ago, a handshake in this very building marked the founding of Chelsea Football Club itself.

Stamford Bridge is the home of Chelsea Football Club and it opened in 1877 originally as the base for the London Athletic Club, however, in 1905 Chelsea Football Club was formed and Stamford Bridge has been its home to this day. Deans Blinds themselves have a long connection with Association Football as our founder, John Dean, was twice Chairman of the nearby Fulham FC who have been competing rivals of Chelsea for over a century.