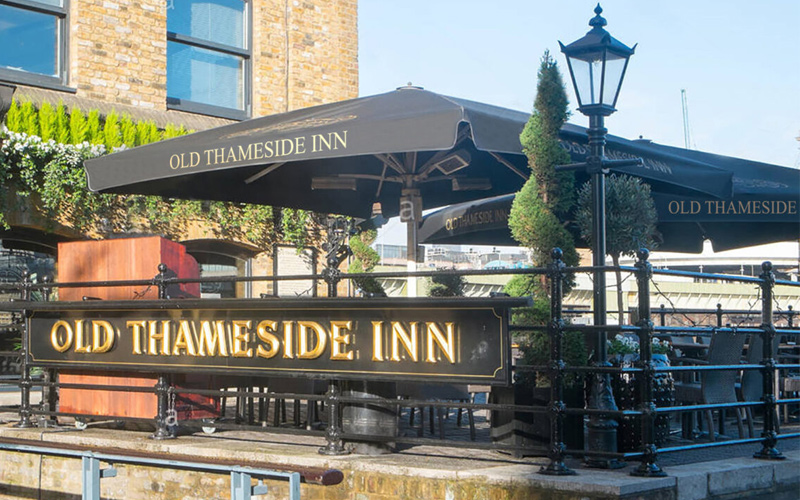 Parasol refurbishment and awning recovers are a cost effective way to protect your long term investment and gain maximum commercial benefit from the resource. This parasol refurbishment has been carried out at the famous Mitchells and Butlers pub, The Old Thameside Inn, located alongside the River Thames and adjacent to the replica of the Golden Hind sailing ship. The parasol refurbishment in this instance comprise the supply of new fabric covers branded through the use of our unique RAGS® graphics system. The parasols also received a complete makeover of their low consumption eco-friendly heating and lighting units.   For the renovation of both parasols and awnings,  whether a simple straight forward new cover or an ancient traditional blind or an awning requiring total re-construction, our facilities mean we are almost always able to save the casualty and return it to its previous pristine state. We are often able to source or replicate old or discontinued parts to replace those damaged by storm or, on occasion, vehicular contact.

The Old Thameside Inn is an historical pub  known for both its previous use and the location. Previously a spice warehouse, behind which stand the remains of Winchester Palace. The narrow, dark and cobbled road that runs behind the pub is linked to the original Clink Prison. which was burned down in the riots of 1780.  Alongside the pub is a full-scale replica of Sir Francis Drake’s famous ship, the Golden Hind,.

This  full-size reconstruction of the ship Golden Hind was built in the original way in Appledore, Devon and launched in 1973. The ship was created after three years research and construction. The objective of the original Golden Hind  was to find new places and seek opportunities for trade. The captain Francis, later Sir Francis,  Drake, however, acted as a privateer with unofficial support from Queen Elizabeth 1 and she did her fair share of semi-official pirating on the high seas eventually becoming laden with bullion and other treasure  before returning home and delighting the Queen with the hoard which quickly swelled the regal coffers.