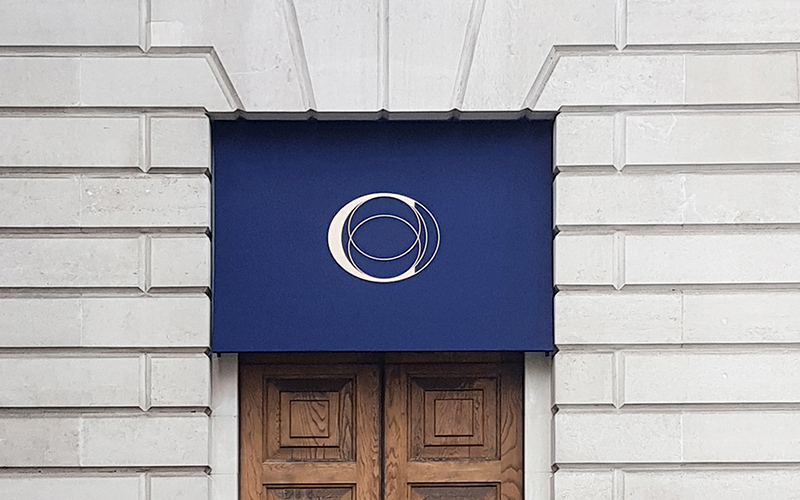 Panel canopies by Deans are a simple, contemporary and cost effective solution for shop fronts which require a fixed permanent three-dimensional sign system which emphasises a particular elevation or feature on the building. At the new Cordon Bleu Head Office on Fleet Street in Central London the panel canopies we have installed  highlight the main entrances to the building without extending the facia building line. The slim profile of panel canopies is set at a angle decreed by the particular fixing and presents the perfect substrate for the application of branding.

Here at the Cordon Bleu building the unique Cordon Bleu logo has been applied through the use of our bespoke RAGS® application process which provides sharp, durable graphics in any colour or combination of colours. The panel canopies are constructed from and aluminium framework over which a UV and soil resistant fabric is firmly stretched, providing a crease free finish. The framework, which contains no plastic parts, can be powder coated in our London factory to any recognised RAL shade.

Le Cordon Bleu, one of the world’s most famous and prestigious French cookery schools, has opened a new, second site on Fleet Street in London. It has taken over the lease for a new school and in-house restaurant which will open to the public. It has signed a new 35-year lease on the former site of Lutyens restaurant, which closed last June. It is the second location for the 143-year-old Paris-headquartered cookery school in London. Le Cordon Bleu has operated a site in Bloomsbury Square, Holborn, since 1931. The restaurant will both complement and promote the school in London, with the restaurant offering work experience to its students.

Many people do not know that Fleet Street is named after the River Fleet which is a main tributary of the River Thames. In the sixteenth and seventeenth centuries London became increasingly crowded and The Fleet was built on turning it, firstly into a water conduit, and finally being entirely concealed by the metropolis above.