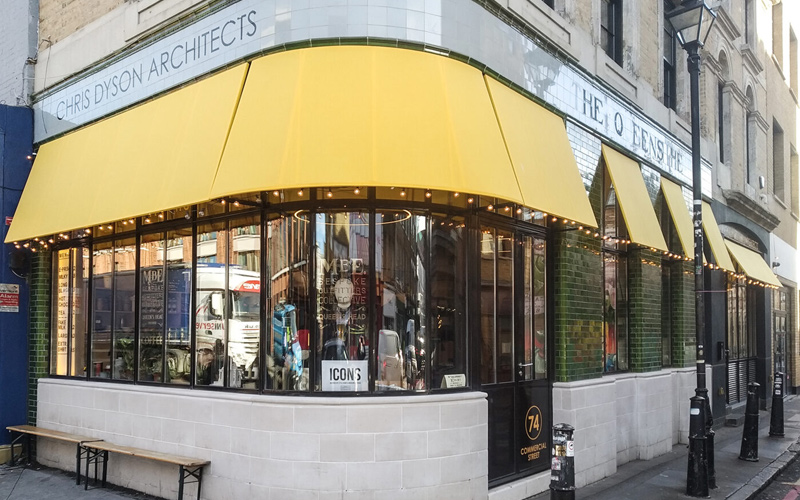 Panel canopies are an interesting, yet intriguingly simple solution for providing shade signage to buildings on multiple elevations and where there is little in the form of substrates to provide a fixing. These panel canopies, which we have recently installed at the Chris Dyson Architects in Commercial Street, Spitalfields, central London are a case in point. The panel canopies were formed by our expert engineers to follow the curvature on the corner of the building, so forming a continual sequence of units to all the building elevations.  Our panel canopies are constructed using only metal parts for their frames, so no plastics are involved, and the UV resistant fabric covers are stretched over the frames then securely fixed directly to the framework. Panel canopies can also provide a solid base for graphics, if required, for which we employ out very own bespoke RAGS® branding process.

CDA was founded in 2004 by Chris Dyson, a former senior designer at Sir James Stirling and Michael Wilford Associates, and more recently at Sir Terry Farrell and Partners. The practice is based in the historic Spitalfields area of London, where Dyson has lived and worked for 20 years, and where many of the practice’s early projects are located. They have a diverse portfolio of projects across Europe and Asia, from small private commissions to public buildings and urban planning proposals. There are two primary strands to the practice: the first is historic conservation architecture applying skills in intelligent conservation and sensitive building design to projects, and the second is grand architecture concerned with cultural and commercial commissions.

19th century Spitalfields was notorious for being the setting of some of the Jack The Ripper murders and the notorious Ten Bells pub which is  still in Commercial Street was recreated as the setting for the film From Hell about Jack the Ripper. In the film Johnny Depp (as Inspector Abberline) is seen drinking there with Ripper victim Mary Jane Kelly.