No shortage of classic awnings at Deans 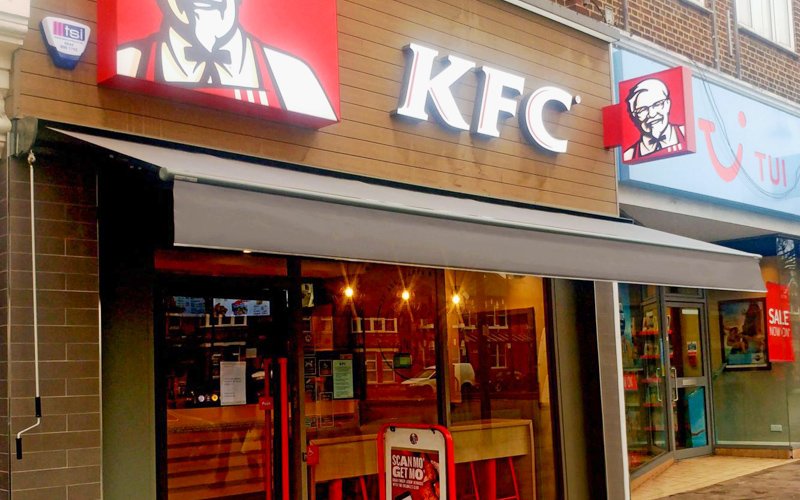 Classic awnings, are a popular commercial awning system available from Deans Blinds offering, as they do, a cost effective solution to shade and aesthetics through its semi cassetted makeup which can be manually or electrically controlled. Seen here at KFC franchise on George Lane in South Woodford the awnings are manually controlled via a sealed gearbox integrated into the awning roller and simply opened and closed using a cranked handle.  These Classic awnings have been powder coated in a client specific grey to match the fabric of the awnings.  Graphics may be applied to the Classic awnings which will highlight your business and give useful information such as website addresses or telephone number details.

KFC, formerly known up to 1991 as Kentucky Fried Chicken, is an American fast food restaurant chain that specializes in fried chicken. Headquartered in Louisville, Kentucky, it the world’s second-largest restaurant chain (as measured by sales), with almost 20,000 locations in 123 countries and territories around the globe. This branch in South Woodford, London is typical of the convenient and local nature of the KFC franchise.

South Woodford lies within the London Borough of Redbridge and the Redbridge Drama Centre, located alongside Churchfields Junior School, providing workshops for young children aged 5 and above and also to adults right  up to the age of  65. It also provides drama education to local schools and culture to the surrounding area. The drama Centre has an in-house theatre company named Vital Stages. There are shows at least once a week from touring companies.