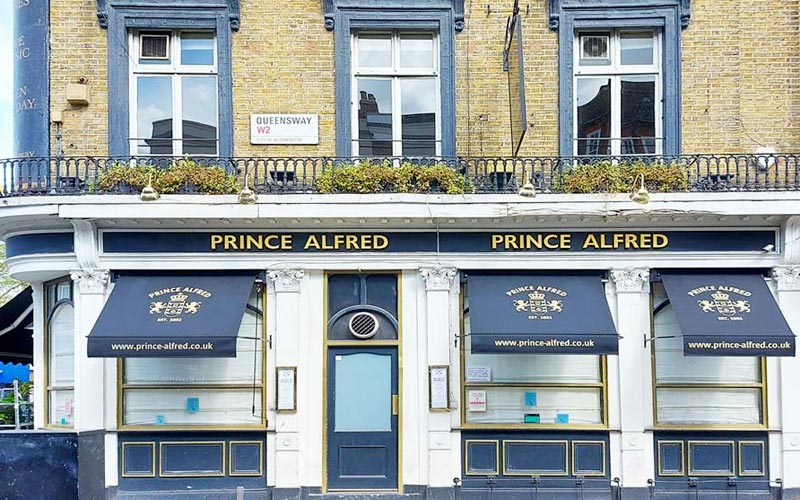 These three Marlesbury awnings, installed here at The Prince Alfred pub on Queensway, Westminster, London, have been intricately decorated with branding which has been applied through the means of our bespoke RAGS® graphics process.  RAGS®  is a  technique which has been developed by us  and which allows for the most detail graphic to be applied to awning covers in any recognised pantone reference shade.

These Marlesbury awnings feature end fixed Classic boxes for ridgidity with end cheeks  to cover the awning when in the retracted position. The  arms have pivoting fixings which  allow the awning to be retracted through the  simple medium of a cranked handle which can be easily operated with minimal effort. The arms of the Marlesbury awning have been powder coated in our London factory with a hard finish which contrasts with the clean white paintwork on this fine Georgian façade. The Marlesbury Awning is an elegant solution based on the old style continental awning of the 19th century. It’s simple and graceful lines allows it to complement both classic and contemporary settings.

The Prince Alfred has been on Queensway since 1851 and has become a firm favourite withlocal residents and tourists alike. Prince Alfred is a traditional British pub serving a wide and constantly changing range of cask conditioned ales, draught and bottled lagers, as well as an extensive range of gins and wines from around the world.

Queensway has an interesting history in that it was originally part of the Bayswater Road. In the 19th Century, Victorian era  it was renamed Queens road but the upmarket nature of the area did not suit the local populace who felt The Queensway had a more dignified ring to it.

Click here to find out more about our Pub Awning solutions