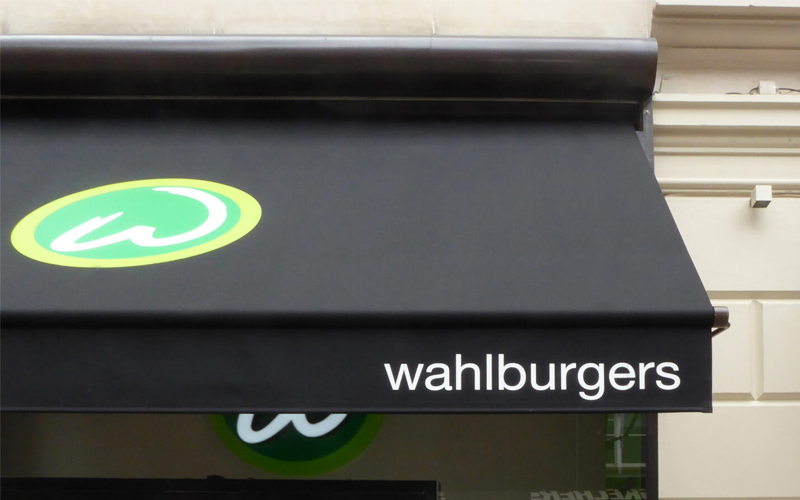 Greenwich awnings are a modern version of a traditional system with the advantage that the awning can be operated either manually, via a gearbox, or electrically, using wireless remote controls.  These two Greenwich awnings which we have installed at the new Wahlburgers in Covent Garden have an unusual feature in the bespoke circular side fix show brackets we have employed to gain a suitable fixing. Additionally, the distinctive “Wahlburgers” Logo and text has been neatly applied to the both the main cover and the weighted valances of the Greenwich awnings using our bespoke RAGS® branding process.  The awning boxes have been made in the traditional way  with harvested hardwood and recessed below the shopfront soffits to appear as an integral part. The arms and aforementioned bespoke fixing brackets have been powder coated with a bronze finish  to blend in with the shopfront surround.

Wahlburgers has opened its first restaurant outside North America in Covent Garden. founded by Paul Wahlberg, alongside his brothers – superstar actor and producer Mark and New Kids on the Block star Donnie – the restaurant currently features on its own eponymous reality television series which showcases the running of the restaurant group.  Wahlburgers’s menu aims to make you smile whilst offering a host of hearty and lighter offerings. The chef has put his own spin on Wahlberg family favourites like Mom’s Sloppy Joes and Mac ‘n Cheese with Smoked Bacon.