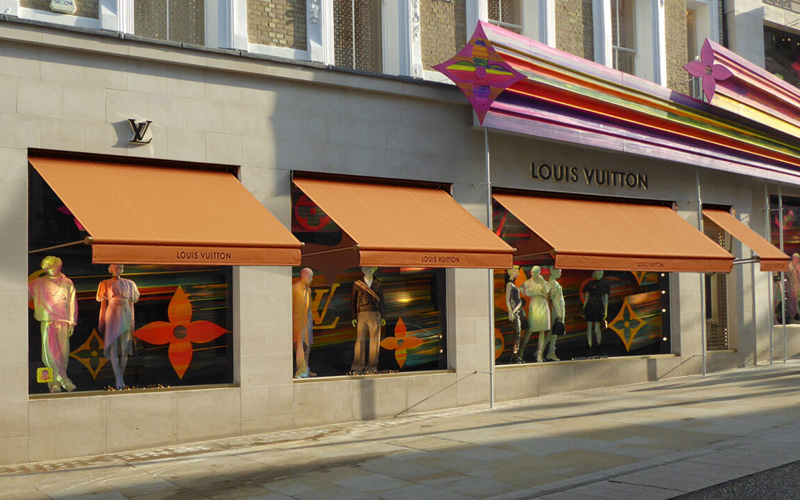 Greenwich Awnings® are often installed on prestigious and historic sites in series as their classic appearance can enhance the location without imposing upon it. In addition, the way in which our Greenwich Awnings® retract, within a traditional awning box, the mechanism can be hidden from view and the elements. It can be seen on this particular example, on the newly re-opened Louis Vuitton store in New Bond Street Mayfair, that the alternative recess option has been chosen installing the roller within the shopfront to present a neat and uncompromised aspect to this impressive building. The simple, yet elegant, lines of the Greenwich Awning®  are perfectly suited to boutiques, hotels and historical buildings with the advantage that the awning can be operated either manually, via a gearbox, or electrically, using wireless remote controls.

The Greenwich awning® is a British product entirely designed and manufacture here in the UK which makes it unique amongst its Continental contemporaries. These units at  Louis Vuitton are electrically  operated awnings which are connected to an internal control which is simply operated via wireless technology. The external awnings have been supplemented by us installing internal roller blinds which are operated during window dressing changes which are a regular and exciting feature of the store. The valances to the awnings have been subtly branded with the store name through the use of our RAGS® digital branding process.

Louis Vuitton’s London Maison reopened on 24th October at 17-20 New Bond Street. The store underwent months of renovations to reveal a complete reimagining of the space, featuring a sweeping double helix shaped staircase crafted in cerused oak and worked as a sculpture with an offset centre. Nine important artworks are featured throughout the store in addition to a permanent selection of Objets Nomades, the collection of designer travel and home related objects that launched in 2012, keeping alive Louis Vuitton’s long tradition of beautifully crafted travel-inspired objects.