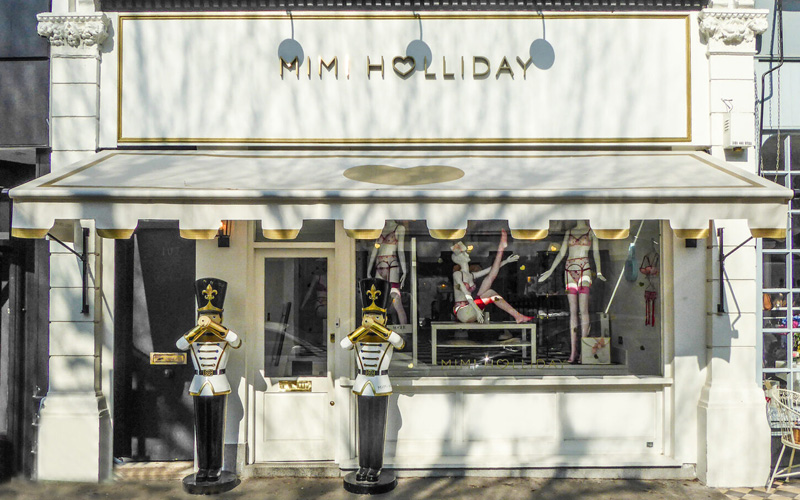 This Greenwich contemporary awning,  which we have installed at the Mimi Holliday lingerie  boutique in Regents Park Road, London,  reflects the elegance of the well known designer’s style. The traditional appearance  of the Greenwich  awning is supported  by its robust construction and, in this case, the  front profile has also been covered with fabric to give a softer and more finished appearance.  This Greenwich awning has been fitted with slides which enable this awning to have a practical shading extension, despite the minimal fixing height available. Note also how the Greenwich awning has been neatly fitted within the window sides to present an unencumbered appearance when retracted. We are particularly proud of the branding to the awning which is in a shading of gold which has only been possible through the application of our bespoke RAGS® graphic application process. Even the valance has been produced an as a one-off in a unique castellated style and finished in the same shaded gold.

Designer, Damaris Evans, is the creative force behind Mimi Holliday, she revolutionised the luxury lingerie landscape and took us outside the long accepted norm. Mimi Holliday has now diversified into maternity lingerie, luxury nightwear, loungewear and designer swimwear and bikinis. Mimi prides itself on its fun, girl-friendly ethos with a focus on exceptional fit and offering of a wide range of sizes, to cater for all customers.

Like most of the other Royal Parks, Regent’s Park formed part of the vast chase appropriated by Henry VIII. Marylebone Park, as it was known, remained a royal chase until 1646. It was John Nash, architect to the crown and friend of the Prince Regent, who developed The Regent’s Park which is the familiar and popular destination there is today. The park comprises 410 acres of ground, most of which is open parkland with a wide range of facilities and amenities, including gardens; a lake with a heronry, waterfowl and a boating area; sports pitches; and children’s playgrounds.