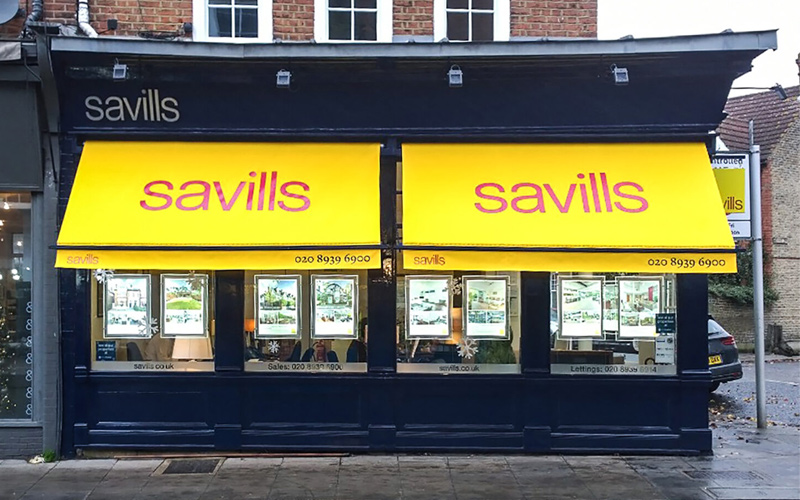 Traditional Deans shop awnings have been supplied by us to Savills the Estate Agents for a number of years and these two shop awnings we have installed at the Barnes branch of Savills are typical of these sites. The shop awning boxes are painted, using environmentally safe water based paint, to match the traditional Savills shop fronts and the yellow coloured UV ressistant awning fabric is similarly used on all Savills sites. The Savills graphic has been applied in a contrasting colour through the use of our bespoke RAGS® branding process.  Deans shop awning boxes have been constructed from harvested hard woods and the traditional steel arms have been powder coated to a durable finish in our own powder coating plant.

Savills were established in 1855 and now have over 600 branches Nationwide. Their declared aim is to help you sell, buy, let, rent or manage your property in and around the Barnes area. Each of these elements can be stressful, so they consider that how they work is as important as what they do. This means keeping you informed, reassured and supported throughout any project.

Barnes first appeared in the Domesday book of 1086 as “Berne”. The original Norman chapel of Saint Mary’s, in Barnes village, was built between 100 and 1150 AD and was extended two hundred years later. Some the oldest Barnes houses are to be seen along the Terrace on the west bend of the river and these were constructed early in the Eighteenth Century – most of them now carry blue plaques.