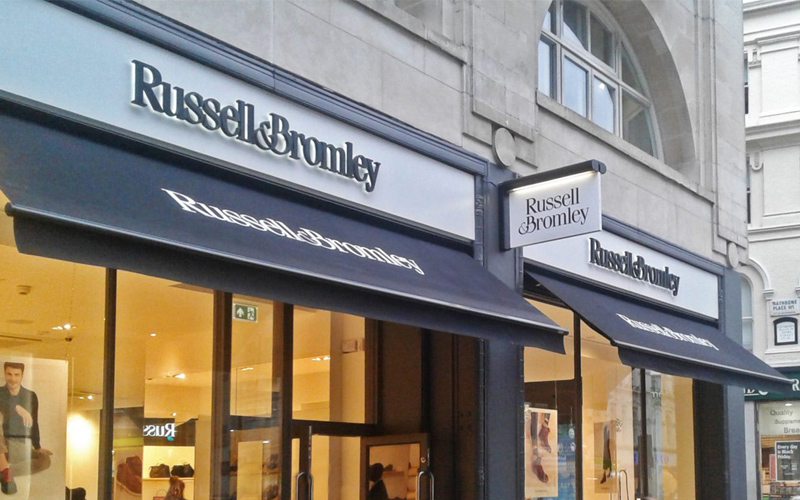 Deans have been installing recessed contract awnings for contract clients since before the Second World War under the banner names of the Deans Compact awning, the Deans Electromatic awning and the Deanmaster shop  awning. Today the contract awnings system we present for installation into  commercial shopfront facias is the Deans Shopaway. awning. The Deans Shopaway contract awning is a recessed foldaway system designed specifically for installation into both  modern and traditional shop fronts. These contract awnings are constructed from maintenance free powder coated aluminium and controlled remotely via a wireless switch though manual options are also available.  The sophisticated black awning fabric on this Russell and Bromley site in Regent Street, central London, sets off the well known Russell and Bromley text which has been applied by our bespoke in house graphics studio.

The work was carried out in association with our long standing client, Superior Shopfitting of Blackwall Trading Estate, East London.

Russell & Bromley was started in 1873, just 11 years before Deans itself was formed, by George Bromley, a shoemaker, when he  married his employer, Albion Russell’s daughter, Elizabeth in Lewes near Brighton. The family store in Eastbourne became the first to carry the Russell and Bromley name above the door in 1880 and is of course now an established and highly respected shoe and accessory retailer catering for customers on the high street and via their internet e-commerce site.

Completed in 1825 Regent Street was early example of town planning in England, replacing a number of earlier roads including Swallow Street. Nash’s street layout has survived, although all the original buildings except All Souls Church have been replaced following reconstruction in the late 19th century. The street is well known for its flagship retail stores, including Liberty, Hamleys, Jaeger and of course Russell and Bromley. The Royal Polytechnic Institution, now the University of Westminster, has been based on Regent Street since 1838.