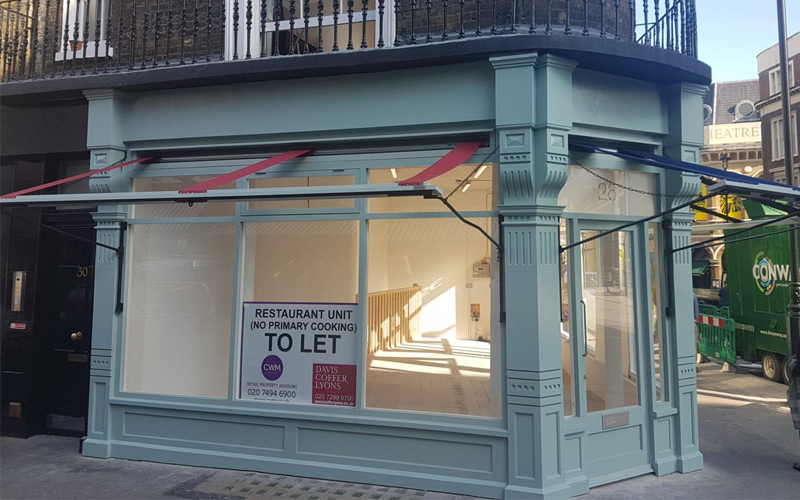 Commercial awnings on new developments are a feature of many shops and other high street premises by virtue of their multiple benefits including shade for the sun, protection for customers in rain showers and of course the many promotional opportunities offered by the advertising potential  of applying graphics to the main awning covers and their valances.

When new retail outlets are built the developer can offer inducement to prospective tenants  by the installation of awnings in advance of occupation. Clearly, this is more attractive if the new tenant can choose their own colour scheme and graphic so Deans have developed a cost effective system for awning installation without having to install complete covers. Thereby saving a large potential investment to the developer and offering new tenants the opportunity to choose their own colours and style.

You can see from the images that we have installed the awnings with plain strips of fabric, at no extra charge, which means there is no delay to the project and the awnings are entirely functional for all demonstration purposes. However,  the cost of complete covers has been avoided and the choice of fabric and logo design is completely free for the new tenant.

The location of this project is particularly interesting on the building in Wellington Street London WC2 which housed the offices of Charles Dickens’ magazine “All The Year Round” and his private apartments 1859-1870. “All the Year Round” was a Victorian periodical, it being a British weekly literary magazine founded and owned by the novelist Charles Dickens, published between 1859 and 1895 throughout the United Kingdom. Edited by Dickens, The periodical was the direct successor to his previous publication Household Words, which was abandoned due to differences with his former publisher. “All Year Round” hosted the serialisation of many prominent novels, including Dickens’ own A Tale of Two Cities. After the death of Dickens in 1870, The periodical  was owned and edited by his eldest son Charles Dickens, Jr; with a quarter share being owned by the editor and journalist William Henry Wills.