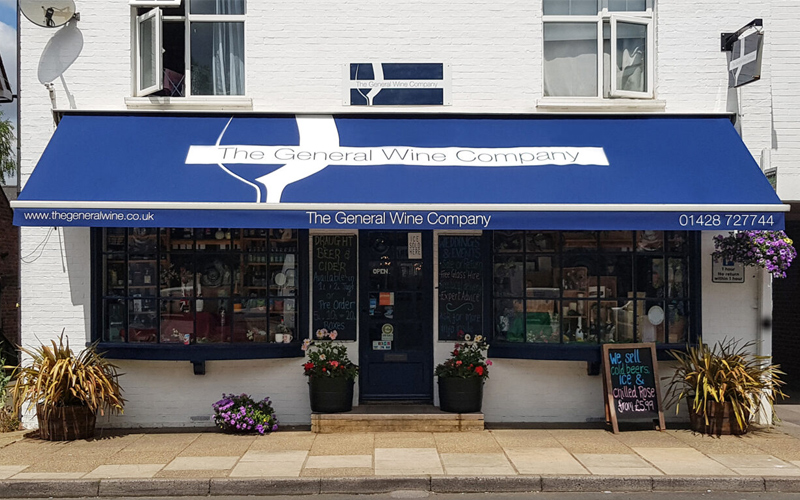 This large  Classic commercial awning, installed at The General Wine Company, Liphook, has been dramatically branded in the logo style of the client with a separate, weighted, valance printed with additional useful text. The branding is carried out using Deans unique RAGS® graphic process which can handle logos of any size with an imressive degree of accuracy and depth of colour. The Classic commercial awning  is one of our most robust commercial awnings and is most suited to installations of a greater width or arm extension. In the case of The General Wine Company the large extension was a requirement with the objective, not only of highlighting the location, but also providing maximum solar control, essential for the products within the store. Incorporating  powder coated aluminium framework which, in this case, has been coloured to match the building paintwork contrasts boldly with the blue of the Classic awning cover.  The Classic commercial awning is a robust, heavy-duty system that comes with a protective hood that sits above the awning and protects it from the elements when retracted.

The General Wine Company is a family owned company that has, for 34 years, supplied retail and trade customers with an unrivalled service and fastidious attention to detail. They pride themselves on finding wines that are the very best examples of their origins and those that have a story; then pass these wonderful finds onto their customers. As well as wines, The General Wine Company have an extensive range of spirits – some old and rare, some just rare and  difficult to get hold of.

Liphook grew as a coaching stop between London and Portsmouth during the 17th and 18th centuries. It served as a base during both World Wars  for Canadian troops stationed in Southern England. The military depot continued its military function until it was closed in 1968. Another claim to fame for Liphook was that it recorded the highest temperature in the UK in 1983 at 33.7C.